BY Heather Hughes on July 30, 2018 | Comments: one comment
Related : Soap Opera, Spoiler, Television, The Young and the Restless 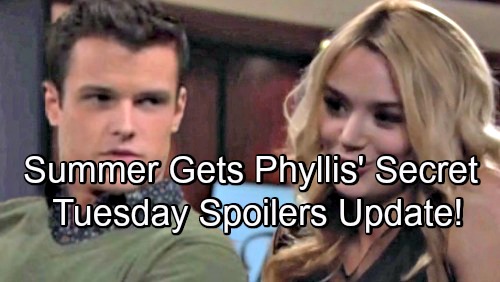 The Young and the Restless (Y&R) spoilers for Tuesday, July 31, tease that Lily (Christel Khalil) will struggle to deal with Hilary’s (Mishael Morgan) death. She’ll battle guilt over the accident and feel sorry for poor Devon (Bryton James). Cane (Daniel Goddard) will give Lily some reassuring hugs and hope they can all get through this.

Later, Lily will meet up with Shauna (Camryn Hamm) and offer some comfort. Y&R spoilers say Shauna won’t appreciate the gesture. She’ll rant about Lily being Hilary’s enemy and reject her support. When Lily steps away to take a call, Cane will give Shauna a warning. He’ll make it clear that Shauna shouldn’t blab about Lily running that red light.

Other Young and the Restless spoilers say Summer (Hunter King) will grow suspicious. She’ll notice plenty of tension between Phyllis (Gina Tognoni) and Kyle (Michael Mealor), but they’ll blame it on work. Summer will decide to get the real story by seducing Kyle, so she’ll invite him to the roof deck and eventually back to her place. It won’t be long until they’re making out and stripping down.

Summer will pry the secret out of Kyle during the buildup. He’ll admit he saw a guy’s clothes at the apartment. Once Kyle confirms that Phyllis hooked up with someone other than Billy (Jason Thompson), Summer will shove him off her. Kyle will quickly figure out that he’s been used! The Young and the Restless spoilers say he won’t be happy about that.

At Crimson Lights, Phyllis will fill Nick in on Kyle’s knowledge. He’ll be concerned, but she’ll downplay the drama. Talk will turn to Fenmore’s and Nick’s desire to obtain it. Phyllis will think Lauren (Tracey E. Bregman) might be interested if Nick’s serious. They’ll address the fact that it’d mean working together, but they’ll seem OK with the idea.

At home, Nick and Sharon (Sharon Case) will enjoy some warm moments. After Nick gives Sharon a bracelet, they’ll mull over their wedding plans. Nick will want a big bash to show the world they’re forever. He’ll also want to build a new house off the ranch, but Sharon will want to stay where they’ve made so many memories.

It sounds like Nick will have a hard time getting Sharon on board. These two will definitely face more disagreements over the next few weeks. In the meantime, Arturo (Jason Canela) will tell Abby (Melissa Ordway) about his past. He’ll mention his old neighborhood and someone he used to be in love with. Arturo will suggest that it didn’t work out because the girl couldn’t be spontaneous.

That’ll lead to an impromptu dance between Arturo and Abby, so it appears he’s found the right match – at least for now! We’ll give you updates as other Y&R news comes in. Stay tuned to the CBS soap and don’t forget to check CDL often for the latest Young and the Restless spoilers, rumors, updates, and news.