BY Heather Hughes on June 11, 2018 | Comments: one comment
Related : Soap Opera, Spoiler, Television, The Young and the Restless 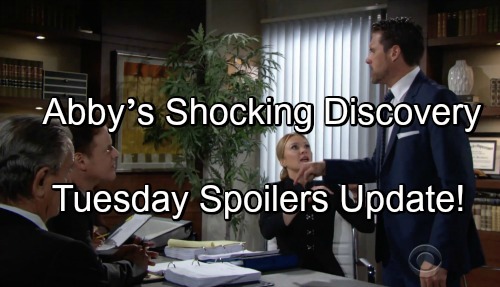 The Young and the Restless (Y&R) spoilers for Tuesday, June 12, tease that arbitration day will arrive. Nick (Joshua Morrow) will worry about the drama ahead, but Brittany (Lauren Woodland) will provide some helpful guidance. She’ll urge Nick to speak from the heart and show how much he enjoys serving as Christian’s (Jude and Ozzy McGuigen) father.

Later, Victor (Eric Braeden) will tell Michael (Christian LeBlanc) that he’d better pull off a win. As the arbitration gets underway, Sharon (Sharon Case) will make one last plea to stop it. She’ll hope that Victor and Nick can work out an agreement on their own, but neither side will budge.

Once the mediator kicks things off, Michael will talk about why Victor’s a good custody candidate. He’ll act like Vic’s a loving family man and the best choice to raise Christian. Brittany will insist that removing Christian from Nick’s home would be devastating. It could do serious damage to the boy.

The Young and the Restless spoilers say Michael will show off the paternity test results. Victor will explain that Nick wanted to leave town and he couldn’t stand for that. Christian is his last link to Adam (Justin Hartley). Of course, Brittany will suggest this is just a retaliation plot. She’ll argue that Victor wants revenge since Nick wouldn’t return to Newman Enterprises.

Victor’s age will also be a factor. Brittany will even contend that Victor’s own kids were primarily raised by their mom and nannies. Y&R spoilers say Nick will get his chance to speak soon after. He’ll indicate that Adam wanted him to raise Christian and that’s exactly what he’s been doing.

As for the Newman situation, Nick will explain that Victor’s usual scheming turned him away. Michael will accuse Nick of using Christian to get back at Victor. That’ll prompt a major meltdown and a warning for Nick. After a short break, Michael will call Sharon as a witness. It looks like he has a ruthless plan in mind!

Other Young and the Restless spoilers say Arturo (Jason Canela) will be driving along in his car. He’ll be surprised when a cop suddenly pulls him over. Meanwhile, Kyle (Michael Mealor) and Abby (Melissa Ordway) will chat at The Dive Bar. He’ll push her to make a Jabot comeback, but she’ll want to stick with Newman. Abby’s parents are both there now, so she’ll want to prove her worth.

Over with Neil (Kristoff St. John), he’ll be concerned about Jack’s (Peter Bergman) search. Jack wants to find out who his biological father is, but that could bring information he’s not ready to learn. Back at The Dive Bar, Summer (Hunter King) will encourage Abby to give Arturo another shot.

Afterward, Arturo will tell Abby about getting a speeding ticket. He’ll gripe that he’s had nothing but bad luck lately. Once Arturo explains, Abby will determine that Victor’s behind his latest string of snags. In the athletic club’s dining room, Jack will catch up with Summer briefly. He’ll admit he’s not an Abbott and she’ll talk about how great her journey of self-discovery was.

Summer will reach out to Kyle and ask him about the non-Abbott situation. He’ll continue to keep his ex at a distance, so a potential reunion could take some time. We’ll give you updates as other Y&R news comes in. Stick with the CBS soap and don’t forget to check CDL often for the latest Young and the Restless spoilers, updates, and news.