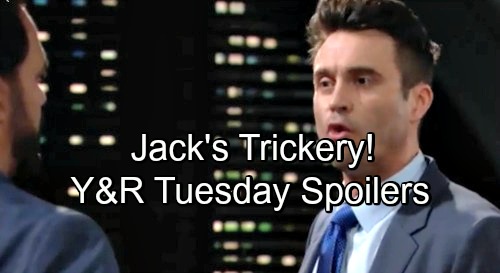 The Young and the Restless (Y&R) spoilers for Tuesday, June 19, tease that Jack (Peter Bergman) will resort to a bit of manipulation. He’ll prove to be quite the charmer, but it looks like he’ll have an ulterior motive. In Monday’s new Y&R episode, Jack learns Phillip Chancellor might be his biological father. Perhaps Jack will butter someone up on Tuesday in hopes of learning more info.

There are surely more records to sort through somewhere. Jack may be able to follow some sort of trail that could prove his suspicions. Of course, Jack could also try his luck with Dina (Marla Adams). He may casually mention Phillip Chancellor’s name and see if it gets a reaction out of her. Jack will be more desperate than ever to discover the truth, so expect his digging to really rev up.

Meanwhile, Hilary (Mishael Morgan) will need some comfort. Y&R buzz suggests that Hilary may have a miscarriage at some point, but it seems too soon for that. Instead, this might involve a crisis with Shauna (Camryn Hamm). The teen has been cramping Hilary and Devon’s (Bryton James) style just a bit, but she hasn’t been a real troublemaker so far. If that changes, it could certainly leave Hilary upset.

The Young and the Restless could put Hilary’s parenting skills to the test. Shauna obviously isn’t Hilary’s daughter, but the same idea applies. Hilary’s in charge of Shauna at the moment, so she’ll have to handle it if the girl gets out of line. Whatever the case, Devon will end up consoling Hilary on Tuesday. He’ll do everything he can to lift Hilary’s spirits and make her feel loved.

Other Young and the Restless spoilers say Phyllis (Gina Tognoni) will take action. She’ll feel like she needs to deal with a growing problem, so this may be about Summer (Hunter King). Phyllis just wants what’s best for her daughter. She’d love to see Summer straighten up and make something of her life.

Phyllis might have a chat with Kyle, who’s teaming up with Summer on a Jabot project. She could push him to be kind and cooperate during this process. It would work out better for everyone if Summer and Kyle could get along.

Of course, Summer would rather focus on Billy (Jason Thompson) Later this week, she’ll continue to flirt and pull Billy toward trouble. We’ll give you updates as other Y&R news comes in. Stay tuned to the CBS soap and don’t forget to check CDL often for the latest Young and the Restless spoilers, updates, and news.