BY Heather Hughes on June 18, 2018 | Comments: one comment
Related : Soap Opera, Spoiler, Television, The Young and the Restless 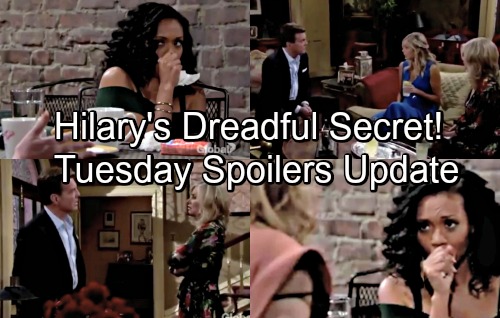 The Young and the Restless (Y&R) spoilers for Tuesday, June 19, tease that Sharon (Sharon Case) will need time to mull over Nick’s (Joshua Morrow) proposal. She’ll give him the news and head over to Crimson Lights later. Meanwhile, Mariah (Camryn Grimes) will face a grumpy Hilary (Mishael Morgan). She’ll learn that Hilary’s battling morning sickness and doesn’t want Devon (Bryton James) to know.

Afterward, Sharon will arrive and give Mariah the scoop. She’ll talk about Nick’s offer of marriage and explain all her concerns. Sharon will worry that Nick’s just doing this because of Victor (Eric Braeden) and the custody case. Their relationship might look more stable if they tied the knot.

However, Sharon will hint that she doesn’t hate the idea. She’s got plenty of pros to go with the cons. Y&R spoilers say Mariah will think instincts are important. She’ll feel like Sharon should figure out what’s truly in her heart.

Back with Hilary, she’ll fill Phyllis (Gina Tognoni) in on her morning sickness. Phyllis will also learn that Hilary and Devon are back together. She’ll hate that Hilary’s not feeling the greatest, but she’ll note that it’s part of the deal. Hilary signed on for a baby and that means she’ll face some typical pregnancy pitfalls.

Later, Phyllis will get updates on Nick’s proposal. She’ll point out all the reasons this could be a disaster. Phyllis will insist that Sharon was right to hesitate, so that’ll give Nick something to think about. However, Nick won’t waver in the end. When he meets up with Sharon again, he’ll reveal why he proposed. After Nick’s speech about making Sharon feel loved, she’ll finally accept.

Other Young and the Restless spoilers say Jack (Peter Bergman) will have a chat with Ashley (Eileen Davidson). He’ll bring her up to speed on his Chancellor suspicions and mention that he’s going to speak with Dina (Marla Adams). Once Ashley’s alone, Abby (Melissa Ordway) will appear and admit that she’d like to move back in the Abbott house. She’ll be miffed about all Victor’s relationship meddling.

Abby will also urge her mom meet Arturo (Jason Canela). That’ll lead Ashley to believe it’s getting pretty serious. Unfortunately, Jack will come up empty in his conversation with Dina. He’ll decide to talk to Esther (Kate Linder) next, but that plan won’t pan out either. Esther won’t know anything about a potential affair between Dina and Phillip Chancellor (Donnelly Rhodes).

However, Esther will mention that Phillip Chancellor III (Thom Bierdz) and Chance (John Driscoll) might know something. The downside is that Jack will have to wait. They’ll be in the Himalayas for a couple months and won’t be reachable. Jack will explain the situation to Phyllis eventually, but he won’t seem ready to sit back and do nothing. Perhaps there’s a way to get some answers on his own.

At The Dive Bar, Ashley will meet Arturo and hit the dance floor with him. Nikki (Melody Thomas Scott) won’t be pleased by the sight. She’ll suggest that Ashley might be Arturo’s next conquest, but Abby won’t agree.

At the penthouse, Devon will complain about Hilary leaving him out of the loop. He’ll explain that Phyllis texted him about the morning sickness. Devon will assure Hilary that he’s all in on this pregnancy, including the parts that aren’t so fun. The Young and the Restless spoilers say they’ll lock lips as they continue to enjoy their reunion.

Y&R has some fantastic scenes in store. We’ll keep you posted as other details emerge. Stay tuned to the CBS soap and don’t forget to check CDL often for the latest Young and the Restless spoilers, updates, and news.