The Young and the Restless Spoilers: Tuesday, May 1 Update – Kyle and Billy Fight Blood-Abbott Clause – Victor and Nikki’s Big Decision

BY Heather Hughes on April 30, 2018 | Comments: one comment
Related : Soap Opera, Spoiler, Television, The Young and the Restless 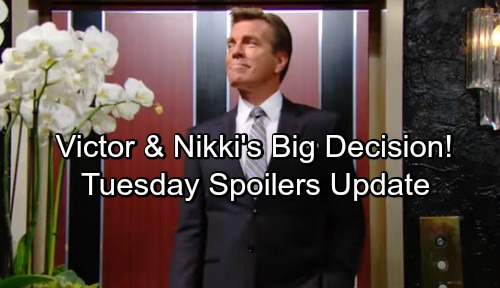 The Young and the Restless (Y&R) spoilers for Tuesday, May 1, tease that Billy (Jason Thompson) and Kyle (Michael Mealor) will clash at Jabot. They won’t agree about taking marketing money and using it for R&D. Jack (Peter Bergman) will insist that Billy gets the final say on this. He’ll think Kyle should just be happy he was allowed to stick around.

Later, Kyle will meet with Billy privately. He’ll suggest he needs some assistance, but Billy will be wary. The issue of Kyle and Victor’s (Eric Braeden) partnership will naturally come up. Kyle will assure Billy that he wants what’s best for his family. He’ll want to ditch the blood-Abbott clause and after a little convincing, Billy will join his fight. 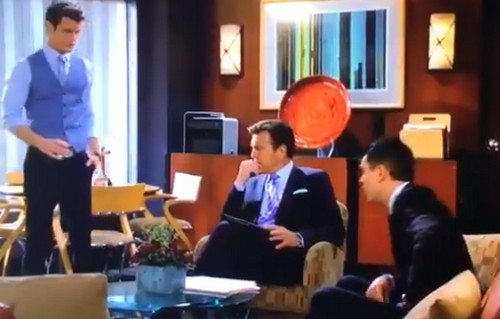 Back with Jack, Billy and Kyle will make their pitch. Jack will seem open to the idea of ditching the clause, but he’ll refuse to work quickly. Y&R spoilers say he’ll think there’s too much at stake. Jack will worry about an outsider being able to swoop in and take charge.

At Crimson Lights, Mattie (Lexie Stevenson) will get a pep talk from her mom and dad. After Lily (Christel Khalil) spots Mattie looking blue, she’ll call Cane (Daniel Goddard) over for some bonding time. Mattie will be depressed about Reed’s (Tristan Lake Leabu) decision to leave, but her parents will offer reassurance. 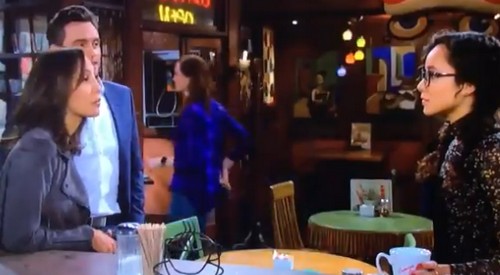 Other Young and the Restless spoilers say a nervous Sharon (Sharon Case) will stop by the ranch. She’ll want to chat with Nikki (Melody Thomas Scott), but she’ll find Victor (Eric Braeden) instead. When Victor talks about his efforts to locate J.T. (Thad Luckinbell), he’ll realize Sharon seems troubled. Nikki will finally arrive to get Sharon out of this conversation before she blabs.

In the stables, Nikki will try to settle Sharon down. Phyllis (Gina Tognoni) will show up to help as well. They’ll convince Sharon that coming clean would hurt her children as well as Victoria’s (Amelia Heinle). Sharon certainly won’t want the kids to watch their moms go to prison. She’ll agree to tolerate the guilt and try to move on. 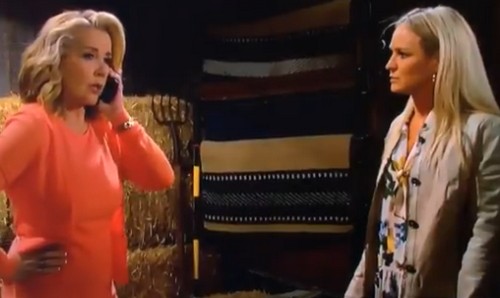 When Nikki returns to Victor, she’ll be pleased to see him up and walking a bit. The Young and the Restless spoilers say they’ll come together for an important conversation. Victor and Nikki will decide to put an end to their arrangement. They’ve had their fun, but it’s time to wrap it up.

Nikki will want to honor her business agreement with Arturo (Jason Canela), but her hookups will cease. Victor will suggest that he’s already done with Helen (Sitara Hewitt), so they’ll finally have a real marriage again. We’ll give you updates as other Y&R news comes in. Stick with the CBS soap and don’t forget to check CDL often for the latest Young and the Restless spoilers, updates, and news.