The Young and the Restless Spoilers: Tuesday, May 29 Update – Victor Throws Christian’s Paternity in Nick’s Face

BY Heather Hughes on May 28, 2018 | Comments: 2 comments
Related : Soap Opera, Spoiler, Television, The Young and the Restless 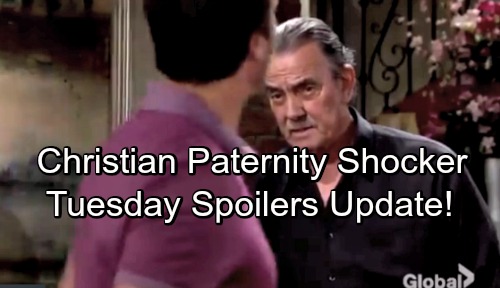 The Young and the Restless (Y&R) spoilers for Tuesday, May 29, tease that Victor (Eric Braeden) will deceive Victoria (Amelia Heinle). He’ll praise Nick (Joshua Morrow) for showing strength of character and suggest that that kind of thing should be rewarded. Of course, Victoria won’t realize Nick’s coming for the COO position. That’s going to cause major issues soon enough.

Nick will have concerns about taking the job, but he’ll tell Sharon (Sharon Case) that he thinks he can handle it. He’ll hope he can avoid being caught in the middle of Victor and Victoria’s conflict. Afterward, Sharon will spill the COO news to Victoria. She’ll warn that Victor’s up to his old tricks, so Victoria will head off to confront Nick.

The Young and the Restless spoilers say Victoria will rip into Nick for stealing her job. He’ll blame his sister for stirring up trouble with Ashley (Eileen Davidson) and knocking herself out of the spot. Victoria will insist that her punishment was only supposed to be temporary. Despite what Victor claimed, Victoria won’t be on board with Nick swooping in and taking over.

Nick will fume as he realizes his father was testing him. He’ll pay Victor a visit to call him out on his deception. Y&R fans can expect a heated argument as Victor defends his actions. Nick won’t care about his dad’s excuses. He’ll declare that he’s done, but Victor will warn Nick not to toss aside this opportunity.

After talk turns to Noah’s (Robert Adamson) future at Newman, Nick will caution Victor about coming for Christian (Jude and Ozzy McGuigen), too. He’ll contend that Christian will never have anything to do with the family business. Victor will blurt out that Nick isn’t Christian’s biological father (Adam Newman is Christian’s biological father – for newer Y&R fans), so it’s not up to him. A livid Nick will argue that it doesn’t matter. He’ll refuse to let Victor tighten his grip.

Other Young and the Restless spoilers say Jack (Peter Bergman) will spar with Ashley (Eileen Davidson) and Kyle (Michael Mealor) again. He’ll also get frustrated when Dina (Marla Adams) thinks he’s the hired help. Later, Jack will determine that it’s time to move out. He’ll pack his bags and take one last look around before he goes.

At the athletic club, Kyle and Mariah (Camryn Grimes) will continue to bond. Their friendship will grow as they talk about families and coming in as outsiders. Meanwhile, Devon (Bryton James) will treat Hilary (Mishael Morgan) to a wonderful day by the pool. They’ll enjoy massages and take each other by the hand, so Hilary will ask what this means for their relationship.

Devon will confess that he was reluctant to reunite, but all the baby excitement has made him hopeful. The Young and the Restless spoilers say they’ll decide this could be a new beginning. Hilary and Devon will playfully pretend to meet each other for the first time. They’ll share some kisses as they head down the path of a renewed romance.

Devon and Hilary will inevitably face some obstacles along the way, so there’s much more drama to come on the CBS soap. We’ll give you updates as other details emerge. Stay tuned to Y&R and don’t forget to check CDL often for the latest Young and the Restless spoilers, updates, and news.