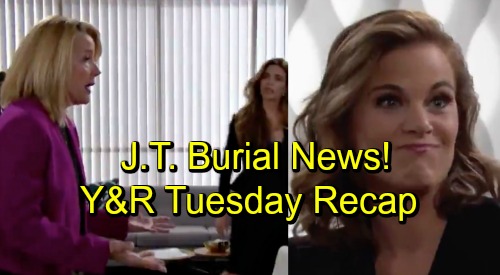 The Young and the Restless (Y&R) spoilers update and recap for Tuesday, October 30, tease that the Abbotts will band together. They’ll all be upset about how things went down with Ashley (Eileen Davidson), but what’s done is done. Jack (Peter Bergman) will convince everyone that they have to come together right now.

That won’t be an easy task, especially since there’s still so much tension between Billy (Jason Thompson) and Kyle (Michael Mealor). Nevertheless, they’ll manage to put their conflict to rest for now. The Abbott clan will be on the same team for once, but that plan won’t last long!

At Jabot, a now redheaded Phyllis (Gina Tognoni) will hint at some big plans. She’ll tell Summer (Hunter King) that there’s a crisis going on, but it could also be an opportunity. Later, Phyllis will surprise Jack and Billy. They’ll both want to take the Jabot throne again, but Phyllis will offer herself as another option.

Billy will scoff at the idea, but Jack will eventually wish Phyllis good luck. Once Phyllis exits, Summer will eavesdrop on the Abbott brothers’ chat. Jack and Billy won’t think Phyllis has a real shot at becoming Jabot’s next leader, but Summer will disagree. She’ll contend that Phyllis could give them a run for their money.

At Crimson Lights, Faith (Alyvia Alyn Lind) will be glum about Halloween. Due to Sharon (Sharon Case) and Nick’s (Joshua Morrow) breakup, she’ll suggest she’s not in the mood to celebrate. With a little encouragement from Nick and Mariah (Camryn Grimes), Faith will ultimately come around.

Nearby, Kyle will corner Lola (Sasha Calle) to apologize for bailing on her the other night. He’ll realize he screwed up, but he’ll beg for another chance. Sadly, Lola won’t be willing to give him one – at least not yet.

At the police station, Sharon will extend an invitation. She’ll convince Rey (Jordi Vilasuso) to hit up the Halloween party at the coffeehouse. Soon after, Nick will bring the kids in. At Faith’s request, Sharon will join in their pumpkin patch outing. She’ll decide to text Mariah and Tessa (Cait Fairbanks) an invite as well.

Afterward, the whole crew will meet up for some fall fun. Nick will do his best to grow closer to Sharon, but Rey’s arrival will get in the way. He’ll be at the pumpkin patch with Lola, so Sharon will be pleased. Once Lola confides in Tessa, she’ll soften a bit toward Kyle. During their next chat, Lola will suggest that Kyle can give her a call. She won’t promise to be available, but this is progress!

Other Young and the Restless spoilers say a panicked Nikki (Melody Thomas Scott) will find Sharon. She’ll pull her away from Rey, who’ll be suspicious once again. Sharon, Nikki, Phyllis and Victoria (Amelia Heinle) will all have something important to discuss. Thanks to a water leak in Chancellor Park, the sculpture over J.T.’s (Thad Luckinbill) body will have to be removed.

Y&R fans can expect loads of arguing, but there’s really only one solution here. The ladies will have to dig up J.T.’s corpse to avoid a deadly discovery. We’ll give you updates as other Young and the Restless news comes in. Stay tuned to Y&R and don’t forget to check CDL often for the latest Young and the Restless spoilers, updates and news.