BY Heather Hughes on September 10, 2018 | Comments: one comment
Related : Soap Opera, Spoiler, Television, The Young and the Restless 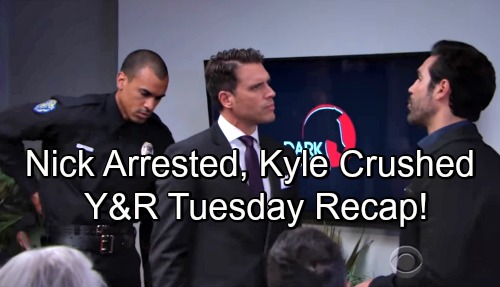 The Young and the Restless (Y&R) spoilers for Tuesday, September 11, tease that Sharon (Sharon Case) will struggle with Nick’s (Joshua Morrow) personality change. When Nick (Joshua Morrow) realizes she isn’t dressed for Dark Horse’s launch, Sharon will admit she’s having a hard time with the new Nick. He’ll do his best to reassure her, so Sharon will decide to attend the bash and support him.

Meanwhile, Rey (Jordi Vilasuso) will run into Arturo (Jason Canela) at Crimson Lights. The Young and the Restless spoilers say they’ll bicker about their sister, Lola (Sasha Calle). Rey will suggest that he’s not leaving town without seeing her. Arturo, on the other hand, won’t be sure Lola even wants a visit with Rey. He’ll argue that he can pass along the news and let Lola decide for herself.

Next, Mariah (Camryn Grimes) will arrive to confront Tessa (Cait Fairbanks). She’ll demand to know if Tessa’s just using her for cash. Y&R spoilers say Tessa will promise her claims are legit. She’ll show some texts from the guys who helped smuggle Crystal (Morgan Obenreder) into Canada. Unfortunately, Mariah will still have her doubts since the number’s blocked.

At the Abbott mansion, Dina (Marla Adams) will face Jack’s (Peter Bergman) questions. He’ll try to find out who the last man in the picture is, but Dina will become tense and upset. After Kyle (Michael Mealor) tends to Dina, Abby (Melissa Ordway) will suggest that maybe she can help. She’ll tell Jack she could put the photo up on social media and seek additional info.

In Nick’s shiny new office, he’ll offer Arturo a full-time position. Nick will want Arturo to serve as the head of his construction department, but Arturo will need mull it over first. After he brings Abby up to speed, Arturo will argue that he’s hesitant to accept because Rey’s in town.

Later, Mariah will talk to Kyle about her Tessa issues. He’ll suggest that it’s tough to think someone might be using you, but Mariah will suspect he’s referring to Summer (Hunter King). She won’t want Kyle to get caught up in his ex’s drama again.

Back with Arturo, he’ll decide to take Abby’s advice. She won’t think Arturo should let Rey destroy his dreams, so he’ll let Nick know that he accepts the offer. Once Nick informs the crowd, Mariah will interview him along with several of his team members and supporters.

Victor (Eric Braeden) will make a surprise appearance a little later. He’ll suggest that Dark Horse isn’t Nick’s birthright, but he’ll still feel like his son has accomplished a lot. Victor will feel like Nick’s taking what he’s learned and using it to build something great.

Other Young and the Restless spoilers say Tessa will speak with Mariah privately. She’ll insist that she returned to Genoa City because she loves her. In the meantime, Rey will crash the party and announce that he’s a detective. He’ll barge in and place Nick under arrest!

In a hotel suite, Summer and Kyle will arrive after ditching the launch early. Kyle will talk about when they used to be together, but Summer will want to get the show on the road. She’ll joke that she can pretend there’s an emotional element if Kyle needs that. After Summer changes into some lingerie, a heartbroken Kyle will feign sleep to avoid sex.

It seems Kyle’s feelings run much deeper than Summer’s, but will that change down the road? We’ll give you updates as other Y&R details emerge. Stay tuned to the CBS soap and don’t forget to check CDL often for the latest Young and the Restless spoilers, updates and news.