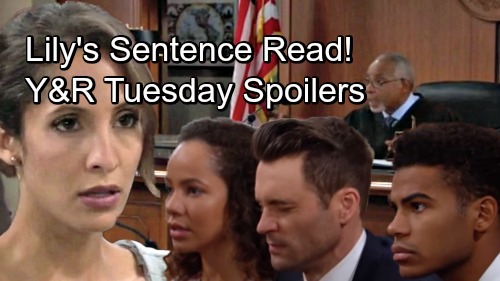 The Young and the Restless (Y&R) spoilers for Tuesday, September 4, tease that Tessa (Cait Fairbanks) will find herself on the hot seat again. Sharon (Sharon Case) was clearly not pleased by Tessa’s recent excuses. No one can blame her for being a protective mom. Sharon doesn’t want to see smitten Mariah (Camryn Grimes) get hurt, so she’ll keep pushing for answers about Tessa’s behavior.

Tessa ignored Mariah’s calls and messages for weeks, but her explanation just didn’t add up. How could she be so preoccupied that she couldn’t send a text? Sharon would be even more suspicious if she knew the rest of the story. It turns out Tessa found some people to help with Crystal’s (Morgan Obenreder) move to Canada, but now they’re demanding $20,000 – or else.

Mariah needs to be asking the hard questions here, but she probably won’t be in a hurry to push for more details. Considering Tessa’s track record, perhaps she’s being a bit too trusting. Still, the writing for Tessa has shown growth since the journal incident. When she lies or at least dances around the truth, it’s usually about protecting Mariah. This time will likely be no different.

Nevertheless, that won’t stop out-of-the-loop Sharon from snooping. There’s a good chance Tessa will get started on her mission this Tuesday. That cash isn’t going to raise itself! Naturally, Mariah will pitch in. She’ll worry about the baddies coming to rough up or even kill Tessa, so they have to get that 20 grand ASAP.

You can bet Sharon will wonder what the girls are up to. If Tessa’s suddenly desperate for money, it’s going to set off some alarm bells. The Young and the Restless spoilers say Sharon will doubt Tessa’s motives and try to find out what’s really going on. Mariah usually can’t keep Sharon in the dark indefinitely, so we’ll see how long this secret stays a secret.

Other Y&R spoilers say the conclusion of Lily’s sentencing is coming up. The judge comes back with a decision on Monday’s new Y&R episode, September 3, so he’ll be prepared to deliver it on Tuesday. Will Devon (Bryton James) speak up before the choice becomes official?

It’s possible there’ll be a last-minute change of heart, but that doesn’t mean the judge will have one of his own. Even if Devon decides he was wrong, Lily could still go down. The Young and the Restless fans will be eager to see how it all plays out.