BY Heather Hughes on January 1, 2018 | Comments: one comment
Related : Soap Opera, Spoiler, Television, The Young and the Restless 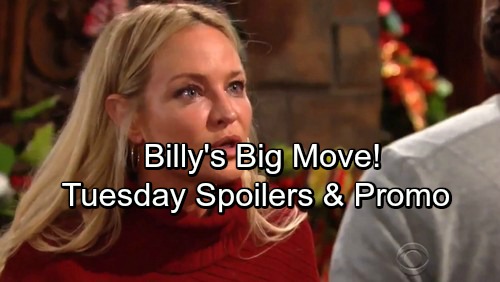 The Young and the Restless (Y&R) spoilers update for Tuesday, January 2, tease that Jill (Jess Walton) will call Cane (Daniel Goddard) out for being a coward. She’ll think Cane should’ve went for more than a hug with Lily (Christel Khalil) on New Year’s Eve. Nevertheless, Jill will be ready to wrap up her visit. She’ll hug Cane goodbye and head off to see Billy (Jason Thompson).

At the athletic club, J.T. (Thad Luckinbell) will bump into Billy at the bar. He’ll suggest that Billy’s been a bad role model for Reed (Tristan Lake Leabu), but Billy will disagree. They’ll bicker until Jill shows up with a proposal. She’ll push Billy to be Cane’s co-CEO at Chancellor Industries.

Over at Lily’s place, J.T. will stop by and they’ll take a moment to catch up. After discussing their kids and marital drama, Lily will have a suggestion. She’ll believe she can get J.T. a job by pulling some strings with Cane. When Cane gets updates, he’ll hire J.T. on the spot and offer to let him move in as well.

J.T. will be grateful for the position at Chancellor, but he’ll want to mull over his living arrangements. Afterward, Billy will arrive with the news that he’s joining Cane at Chancellor. Naturally, Cane will be irked that he has to share his job title. That’s especially true since he’s sharing it with Billy! Y&R fans know these two tend to butt heads when business is involved.

At the penthouse, Chelsea (Melissa Claire Egan) will urge Nick (Joshua Morrow) to forget about what he saw on New Year’s Eve. She won’t think Scott (Daniel Hall) and Abby’s (Melissa Ordway) kiss really mattered. Nick will contend that Sharon (Sharon Case) deserves the truth. Chelsea would certainly want to know if she was Sharon’s situation.

Later, Nick will confront Abby at Crimson Lights. Abby will downplay everything and promise that her dalliance with Scott is over. The Young and the Restless spoilers state that Nick won’t back down. He’ll insist on revealing Scott’s cheating, but he’ll agree to protect Abby’s identity.

Once Nick takes off, Abby will try to contact Scott. She’ll hope to warn him of the trouble that’s brewing. Abby will only get Scott’s voicemail, so she’ll tell him to call her back ASAP. At Sharon’s place, Nick will summon the courage to knock on her door. He’ll announce that he’s there to talk about Scott.

Nick will spill everything in Wednesday’s Young and the Restless episode. It won’t take long for Sharon to put the puzzle pieces together. Abby definitely isn’t going to wiggle out of this mess! We’ll keep you posted as other Y&R details emerge. Stick with the CBS soap and don’t forget to check CDL often for the latest Young and the Restless spoilers, updates and news.