The Young and the Restless Spoilers: Unstable Y&R Relationships – Mia and Arturo Reconnect – Rey and Sharon Not Finished? 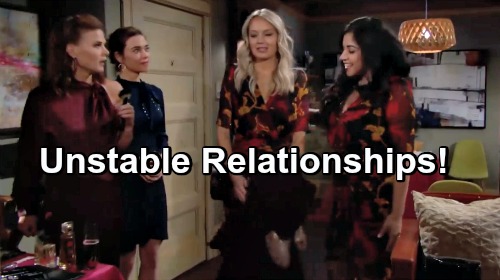 The Young and the Restless spoilers tease that Mia (Noemi Gonzalez) and Arturo (Jason Canela) can still reconnect. While Rey (Jordi Vilasuso) and Mia are genuinely working on their marriage, the spark between Mrs. Rosales and Arturo isn’t fully dead. And that means Sharon (Sharon Case) remains viable for Mr. Rosales.

To be clear, heading into Christmas, Arturo is all about Abby (Melissa Ordway). But Miss Newman’s sudden outburst about Nick’s (Joshua Morrow) refusal to accept her real estate pitch reminded fans that Abby still allows herself to be swayed off-course by strong emotions.

Abby’s maturation process happened during her marriage to Stitch (Sean Carrigan). That relationship proved to be Abby’s first meaningful personal link, even though she admitted to not loving Ben. But that means Abturo is only Abby’s second serious relationship. Said inexperience projects relationship danger moving forward.

For his part, Arturo willfully fooled around with his brother’s wife and then did the same with Victor’s (Eric Braeden) spouse shortly after arriving in Genoa City. There’s no doubt that any impulse cast-off by Abby could lead to an instant reboot with Mia. If that happens, Rey will almost certainly not be willing to forgive again.

Considering their purposeful plot proximity, Sharon is the person Rey would seek if Mia wrongs one more time. Sharon flicked Nick away after processing Phick’s revival and spilling all at her ill-fated second attempt at remarriage. So, she’s free to be with whoever.

As fans saw, Sharon did not take up with the first guy who offered to cavort with her. Even though she’s mingled with Billy (as then played by Billy Miller) in the past, Sharon turned down current Billy’s (as now played by Jason Thompson) offer to fool around after the Jabotique launch.

Circling back to Mia, she knows that Sharon is a threat to her marriage for two reasons. Rey has already developed a personal connection to Case’s character and he’s vulnerable to act on any suspected sign of betrayal.

Mia’s grabby scene at Dark Horse allowed Abby to see that all is not over in Mrs. Rosales’ mind where Arturo is concerned. While Arturo is adamant about not revisiting whatever he had with Mia in Miami, his track record lingers in the back of Abby’s mind. But Mia knows Arturo for a far longer period of time and that personal history can be mined and manipulated in the right circumstances.

Y&R has crafted interwoven storylines that won’t be smoothed any time soon. Arturo and Abby today. Rey and Mia at the moments. But all four GC residents and Sharon represent fluid soapy forces.