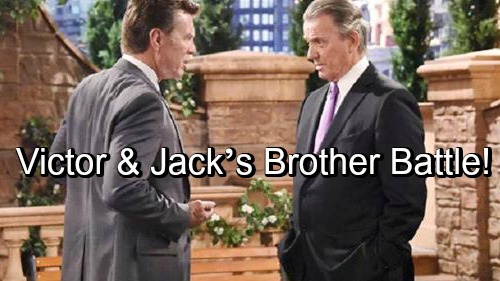 The Young and the Restless (Y&R) spoilers tease that Victor (Eric Braeden) will worry thanks to a new revelation. He won’t know for sure, but he’ll suspect one of the men in Jack’s (Peter Bergman) photo is his father. If Albert Miller (George Kennedy) is Jack’s bio dad, that could bring drama like Genoa City has never seen before!

Jack and Victor have been fierce rivals over the years. Can you imagine how ugly things will get if they turn out to be brothers? Victor certainly won’t want to find out. He’ll explain his suspicions to Nikki (Melody Thomas Scott), which could turn out to be a bad idea. Nikki considers Jack a close friend, so she could be tempted to blab sooner or later.

Nevertheless, Victor will declare that the truth can’t come out. He won’t want Jack to know since this could put everything he’s worked for in jeopardy. If Jack finds out about Victor’s guess, he’ll want a DNA test ordered ASAP. Confirmation could lead Jack to fight for control of Newman Enterprises. The scandal alone would be cause for concern.

Y&R fans will recall that Jack was ready to go after Chancellor Industries if Phillip Chancellor (Donnelly Rhodes) turned out to be his dad. That plan probably wouldn’t have planned out anyway, but the point is Jack gets fired up about stuff like this. He might hope he can make a power play and merge Newman with Dark Horse.

That’s what Victor wants, so Jack might like to beat him to the punch. Bottom line, learning Victor’s his brother would rev up the rivalry. Jack might become obsessed with defeating Vic. Their war could spiral out of control in unpredictable ways.

There’s a good chance Jack and Victor won’t be half-siblings at the end of this storyline, but that may not even matter. Once this feud’s reignited, The Young and the Restless spoilers say it could be too late to stop it! Are you excited to see where Jack’s father hunt goes next? Will Victor end up facing off with his worst enemy again?