The Young and the Restless Spoilers: Victor and Nikki Good Role Models For Wayward Reed – Vickie and J.T. Need To Agree 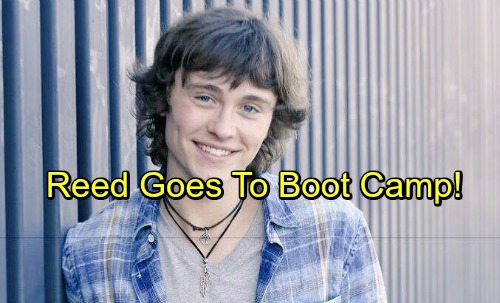 The Young and the Restless spoilers documented Reed’s (Tristan Lake Leabu) recent troubles with the law. He decided to leave his mother’s home, mimicking Faith’s (Alyvia Alyn Lind) choice within the last year. Victor (Eric Braeden) often proclaims a love for his grandchildren. Now, the Moustache and his returned wife have a chance to serve as positive role models and improve their marital ties as well.

Manning up is a goofy term. Decades of male-bashing have been purposeful. Those who use that psychological weapon don’t intend to even societal issues, they seek to shift discrimination. So, a man like Victor Newman never earned anything. He stole everything from the downtrodden, as though anyone who made that claim could somehow prove that?

As far as marriage goes, why would Nikki (Melody Thomas Scott) ever choose to be with a terrible man? Why would anyone who asked that question believe he, or she understood how and why Niktor’s shared heart beats? Ah, a double-question within one paragraph.

All who are anti-Victor will likely shout that this evil-doer is the worst possible person to influence Reed. Keep J.T. (Thad Luckinbill), Nick (Joshua Morrow) and others away from him as well, they would say. Vickie (Amelia Heinle) and Nikki (Melody Thomas Scott) are infinitely preferable, as they possess advanced degrees in humanity.

Wrong. Victor and Nikki are parents and grandparents. They are human beings and have made mistakes. Like their fictional and real life detractors haven’t?

Niktor lived through many periods of success. Together they can guide Reed through this important time in his life. While Vickie and J.T. might not like Reed’s choice, they should come to accept the benefits of having other voices speak to their son’s needs.

Vickie and J.T. weren’t able to provide a stable life for their son when he was a pre-SORAS’d Max Page. Wink. So, why not let Victor and Nikki try to reach Leabu’s version of this character in 2018?

Family matters naturally lead to some moments of conflict. When those times arrive, the first response isn’t to run to a government agency, an attorney, or any other type of self-proclaimed, money-earning fixer. Instead, all involved should embrace bloodline resources and others linked to that inner circle.

Reed’s move to the Ranch could produce positive results. Victor and Nikki can offer wise council. They’ve lived through his time in life and have seen their children live through it as well. Reed should benefit from his grandparent’s experience.