The Young and the Restless Spoilers: Victoria and Abby Rise Up to Defeat Victor – Daughters Take Control of Newman

BY Heather Hughes on May 30, 2018 | Comments: one comment
Related : Soap Opera, Spoiler, Television, The Young and the Restless 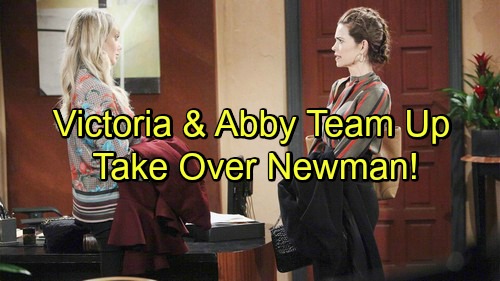 The Young and the Restless (Y&R) spoilers tease that Victor (Eric Braeden) may be underestimating his daughters. In a recent argument with Nick (Joshua Morrow), Victor insisted that the person who took the COO job would run Newman one day. He quickly added that it wouldn’t be Victoria (Amelia Heinle) or Abby (Melissa Ordway).

Victor even went as far as to blame Victoria for J.T.’s (Thad Luckinbill) abuse. Instead of understanding the complexity of an abusive relationship, Victor suggested that she should’ve walked away. Of course, we all know Abby (Melissa Ordway) was previously shoved aside for Victoria. Victor let Abby believe he was grooming her to take over, but that was obviously a lie.

Many Y&R viewers have been complaining about Victor’s sexist attitude on social media. What makes Nick any better than his sisters as a leader? This is the same guy who gave away all his millions just to spite Victor. He was also duped by con artist Chelsea (Melissa Claire Egan), so maybe he’s not really the brainiac to lead Newman into the future.

Since Nick doesn’t want to run Newman, Victor’s willing to wait on little Christian (Jude and Ozzy) to grow into it. Sure, Victor. He’ll get right on that after he’s done finger painting. It would serve Victor right if Victoria and Abby rose up to defeat him. They need to join forces and take charge of their own destiny!

Now’s not the time to quibble over the details. Victoria and Abby both want to run Newman Enterprises, so why not just do it together? Forget the COO position. Serving as Co-CEOs sounds like a good idea. The Young and the Restless spoilers say these two may get on the same page soon.

While Victor’s busy preparing for a custody battle with Nick, Abby and Victoria could stage the coup of the century. Since he clearly thinks they’re no-talent bimbos, Victor would never see their sneak attack coming. Should Abby and Victoria try a bold strategy? Could they pull off a hostile takeover? It might be worth a shot.

Naturally, this move would come with consequences. Abby and Victoria might regret it in the end, but that’d just mean more drama for The Young and the Restless fans! We’ll give you updates as other Y&R news comes in. Stay tuned to the CBS soap and don’t forget to check CDL often for the latest Young and the Restless spoilers, updates, and news.