BY Heather Hughes on September 13, 2018 | Comments: one comment
Related : Soap Opera, Spoiler, Television, The Young and the Restless 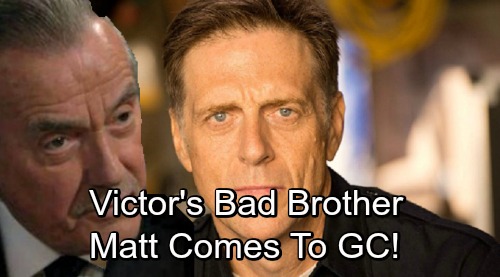 The Young and the Restless (Y&R) spoilers tease that some serious brother drama’s about to go down. We’re not just talking about Victor (Eric Braeden) and his potential half-sibling, Jack (Peter Bergman). Time will tell if these rivals are truly related, but Victor’s confirmed brother might be able to shed some light on the situation. That’s most likely why Y&R’s bringing Matt Miller to Genoa City!

According to Soaps in Depth, Richard Gleason will portray Matt in the near future. He’ll be around for four episodes to start, but there’s always a chance we’ll see more of him. The Young and the Restless spoilers hint that Victor will need some help. He might hope to track down some old records or anything else that could corroborate or disprove Jack’s connection to him.

Victor will believe Matt’s willing to pitch in on his mission, but things may not be as they seem. On soaps, just about everyone has an agenda. Matt will be no different once he enters the picture and stirs the pot. He just might stab Victor in the back if he’s not careful! Of course, Matt should be no match for his ruthless brother in the end. You can deliver a few blows to Vic, but you can’t stay on top for long.

Perhaps Jack and Victor could even find some common ground here. If there’s mutual disdain for Matt, they could find a way to take him down together. How’s that for brotherly bonding? The Young and the Restless promised that Jack’s paternity storyline would come with plenty of twists. We’ve certainly seen several of them along the way, but don’t be surprised if we see even more.

Many Y&R fans suspect that Jack is somehow still an Abbott. Maybe it’s wishful thinking, but there’s always hope. DNA tests can be tampered with and mistakes can be made. It’s hard to accept that Jack is no longer John’s (Jerry Douglas) biological son, so the show could decide to undo this down the road. Soaps have that luxury thanks to the crazy nature of the genre.

For now, The Young and the Restless spoilers say this paternity mystery will press on. Will Matt help at all or just cause pain? How will Victor deal with his sneaky brother? We’ll give you updates as other Y&R news comes in. Stick with the CBS soap and don’t forget to check CDL often for the latest Young and the Restless spoilers, updates and news.