The Young and the Restless Spoilers: Victor’s Health Failing – The Moustache Collapses During Legal Proceedings 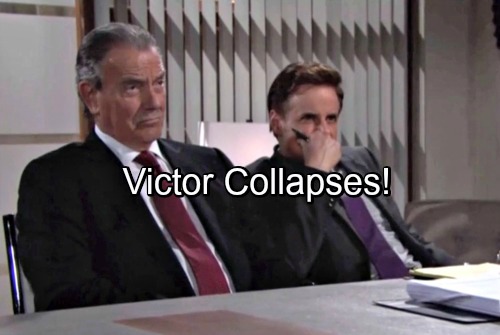 The Young and the Restless spoilers tease that Victor (Eric Braeden) is not fully recovered. His bravado caused him to think that all is well health wise, but it’s not. Thus speculation about a coming collapse during legal proceedings will put him back on the death watch.

It seemed to be a bit of soapy exaggeration. Victor was pumping iron days after being released from the hospital. He strolled into the movie house where he seemingly manipulated the unauthorized release of Dina’s (Marla Adams) paternity drop about Jack (Peter Bergman). Those small and larger actions were both unbelievable, but there was an underlying plan to Y&R’s madness.

Victor was nearly killed after he and J.T. (Thad Luckinbill) beat the pulp out of each other at the Ranch. Then, Braeden and Luckinbill orchestrated one of the more dramatic tumbles down a flight of stairs in recent daytime memory. The result left the Moustache near death.

A short while later, J.T. pulled Victor’s plug at Genoa City Memorial and a mini-stroke occurred. Yet, the old boy recovered and lived. He seemed as invincible as Nick (Joshua Morrow) currently fears.

Christian’s (Jude and Ozzy McGuigen) is supposedly not Nick’s son. A variety of DNA tests have confirmed the fact that this scribe stubbornly refuses to admit. However, it could be true. If so, the battle for the boy’s paternity makes sense. If this plot line is ever reversed, TPTB at Y&R will have to explain themselves.

So, Nick wants to keep his dad away from Christian. Victor is the boy’s closest living relative because his parents, Adam (Justin Hartley) and Sage (Kelly Sullivan) are dead. Well, Sage is, but Adam was not killed by Chloe (Elizabeth Hendrickson) no matter how many times that plot point is hammered. No apologies for the grudging angst expressed in this regard, either.

As a result of Nick’s again exacerbated feelings, Victor took to legality. That is the last refuge of tyrants, as undemocratic manipulators know. They are little boys and girls themselves, dressed up in adult clothes.

As Michael (Christian Le Blanc) and Brittany (Lauren Woodland) trade barbs before the retired judge at arbitration, Nick and Victor will become riled. Nick’s face will tighten while Victor’s heart constricts, or he loses oxygen to his brain, or something like that.

And then it will happen, dramatically. The Black Knight, the Moustache, as Jack calls him, or Lurch, the more humorous moniker that Billy (Jason Thompson) recently applied, will collapse.

Will Victor make it? Is Eric Braeden preparing to move to recurring status as he approaches 80?

These questions and many more will be asked as the Great Man’s life hangs in the balance. But can it really be possible that Victor Newman will die? CDL is a leading source for everything linked to The Young and the Restless. Check back regularly for Y&R spoilers and news!