The Young and the Restless Spoilers: Victor’s Shocking Post-Coma Plans – Will The Moustache Awaken In A Fury? 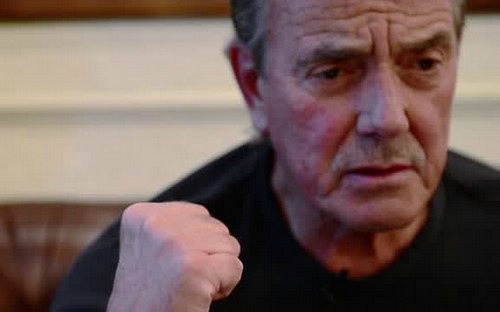 The Young and the Restless spoilers tease that Victor (Eric Braeden) won’t die, obviously. No devoted soap fan ever thought that he would. Instead, the real intrigue involves the plot Kyle (Michael Mealor) precooked with the Moustache.

So there’s Jack (Peter Bergman). He’s stuck behind bars, which neither Victor nor Kyle could have predicted while they were preparing their scheme in past months. Jack learned of said duplicity after he stole Victor’s backup hard drive.

Jack’s claims of betrayal are real, but are also counterbalanced by his own terrible behavior. As Y&R fans recall, Bergman’s character opted to snoop at the Ranch while Victor was lying unconscious at the foot of the stairs. In contrast, Victor gave Jack CPR immediately when both men were trapped after The Underground collapsed.

Let’s skip to post-coma action. With however long the current focus of this storyline extends, meaning Victor’s inactive state, viewers know that the real action will come when the Black Knight (another of Jack’s hilarious name tags) awakes.

In this regard, wouldn’t some funny, but tasteful memes allow Y&R fans to enjoy a few harmless laughs during this serious storyline? That query can be taken as an open call for any creative reader to utilize their technical skills. If said new memes, specifically referencing the Moustache, Black Knight, Lurch, Smilin’ Jack or other connected characters exist, feel free to share (or to create). Now, back to soapy business.

Kyle apparently became Victor’s newest business partner at some point in the recent past. The emails Jack illegally accessed confirmed that stunner. But Mr. Abbott didn’t learn why Kyle had again joined forces with his arch enemy.

The easy leap would seem to be that Kyle and Victor wanted to put Jabot out of business, or take it over after engineering some type of havoc. Jack must be thinking along those lines. That’s why he’s asked Ashley (Eileen Davidson) to do whatever she can to stop his son from ruining the family company. The forthcoming blood Abbott issue secures Ashley’s urgency, though Jack isn’t yet aware that he’s allegedly not John’s (Jerry Douglas) son.

Jack’s plea to his sister highlights his desperation. Ashley is a top-level employee at Newman with a seat on its Board of Directors. But her retained spot on Jabot’s Board also preserves her loyalty.

This recast version of Kyle exudes an unpredictable nature. He might be trying to take advantage of his dad and Victor, considering they’re both currently out of the picture. Jack should hope that’s the case, as Victor won’t react well to Kyle’s disloyalty when he wakes up. That potential skirmish would give Jack an opening.