The Young and the Restless Spoilers: Victor’s Stunning Secret – Knows Who Jack’s Bio Dad Is, Gains the Upper Hand?

BY Kinsley Goldman on May 21, 2018 | Comments: one comment
Related : Soap Opera, Spoiler, Television, The Young and the Restless 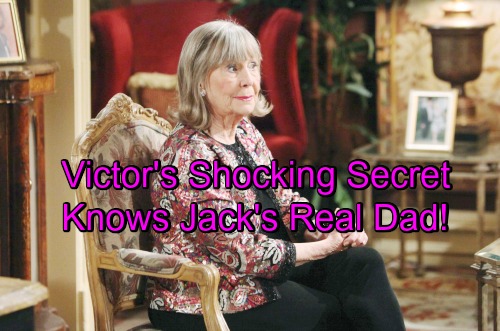 The Young and the Restless (Y&R) spoilers tease that Victor (Eric Braeden) will move forward with an intriguing scheme. Y&R fans know Victor always has some sort of plot in motion. He can’t handle it if he’s not stirring up trouble, but viewers wouldn’t have it any other way! Victor’s plans tend to bring plenty of drama and that’s great news for everyone tuning in.

What’s Victor cooking up this time? The details are being kept under wraps so far, but there are some at least clues to mull over. The Young and the Restless spoilers say Victor will try to rope Nick (Joshua Morrow) into all this. He’ll do his best to lure him back to Newman, but he’ll hold off on telling him the real reason.

Nick’s in for a big surprise when the truth inevitably comes out. Victor (Eric Braeden) may be hoping to take over Jabot and make it part of Newman. With Kyle (Michael Mealor) as his mole, Victor might think that’s possible. If not, Victor could try to sink the competition with any info Kyle offers.

However, the Newman-Jabot chaos may be nothing compared to what else Victor has up his sleeve. During the week of May 28-June 1, Victor will drop quite a bomb. The Young and the Restless spoilers say he’ll let someone in on a stunning secret, so what’s this all about?

Since Victor’s up to no good, he may tell an ally what he has in store. Things are tense between Kyle and Victor at times, but they should press on with their arrangement. It’s possible Victor will confess to DNA test tampering. If Victor altered Jack’s (Peter Bergman) results, that’d be an interesting way to take this storyline.

Nevertheless, we should really consider what would be the biggest shocker of all. What if Victor knows who Jack’s biological father is? He once shared a night out with Dina (Marla Adams) for her “formal dance.” Maybe Dina mentioned something that tipped Victor off. She hasn’t been able to recall the name of her old lover, but something might’ve jogged her memory that evening.

Dina recently had one fleeting moment where she remembered Traci (Beth Maitland). That just goes to show that Alzheimer’s is unpredictable. Even if Dina couldn’t recall or didn’t blab, Victor might’ve started an info search after the interview screening. With his resources, he might know who Jack’s father is by now.

If so, will Victor use his knowledge as leverage? Will he count on Jack being curious? We’ll give you updates as other Y&R details emerge. Stay tuned to the CBS soap and don’t forget to check CDL often for the latest Young and the Restless spoilers, updates, and news.