BY Heather Hughes on April 10, 2018 | Comments: one comment
Related : Soap Opera, Spoiler, Television, The Young and the Restless 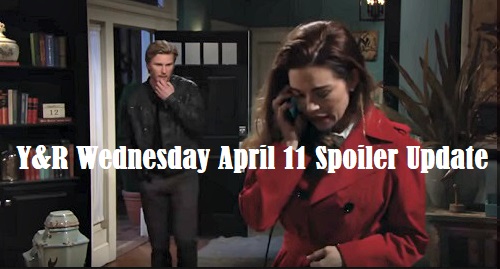 The Young and the Restless (Y&R) spoilers for Wednesday, April 11, tease that J.T. (Thad Luckinbell) will push for a phone-free zone in Hawaii. After Victoria (Amelia Heinle) caves, J.T. will bring up a shocking idea. He’ll think they should just start a new life there and leave Genoa City in the past.

Victoria will be stunned when she realizes J.T. isn’t kidding. She’ll insist she can’t just keep the kids away from Billy (Jason Thompson). However, J.T. will contend that Victoria needs to be free of Victor and her family’s company. The argument will escalate as they accuse each other of being selfish.

When Victoria realizes J.T. locked up her phone, she’ll urge him to open the drawer immediately. The Young and the Restless spoilers say J.T. won’t be willing to do that, but his own phone will ding in his pocket. Victoria will manage to get her hands on it, which will mean bad news for J.T. She’ll see the texts he exchanged with Paul (Doug Davidson) and determine that he’s been keeping secrets.

Victoria will confront J.T. about trying to take down Victor (Eric Braeden). She’ll get him to admit that he leaked the demotion memo as well. Their fierce faceoff will end with Victoria declaring that she’s done. She’ll eventually stomp off and plan to head home with the children. 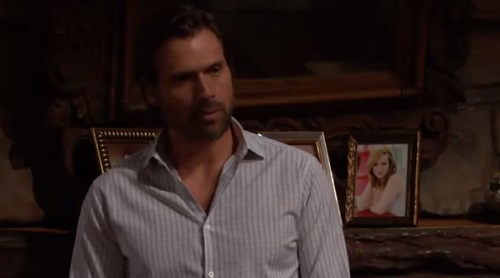 Back in Genoa City, Nick (Joshua Morrow) will stop by to see Phyllis (Gina Tognoni). He’ll mention Sharon’s (Sharon Case) blind date and how it affected him. Phyllis will gripe that she warned Nick not to go down this road again. She knew moving in together would turn into a mess.

Nick will admit that things are indeed complicated. He’ll explain that he shared a kiss with Sharon, but Phyllis won’t think that means much. She’ll indicate that Sharon may be after Christian (Jude and Ozzy McGuigen) instead of Nick.

The Young and the Restless spoilers say Nick won’t agree with that, but his opinion might shift a bit later. He’ll look deep in thought when he hears Sharon chatting with Christian on the baby monitor. Sharon will also have a conversation with Billy (Jason Thompson) on Wednesday. He’ll mention that Phyllis and Nick have been bonding lately.

It looks like Billy will try to stir up some envy for Sharon. The quicker this “Shick” reunion happens, the better off “Philly” will be. Billy is definitely anxious to pull Phyllis out of Nick’s orbit. While he works on that, Phyllis will meet with Lauren (Tracey E. Bregman). She’ll learn Lauren expects her to vote with Kyle (Michael Mealor) at the upcoming board vote.

When Billy appears, he’ll try to help Phyllis change Lauren’s mind. However, Lauren will argue that Phyllis is her employee, so she needs to act in the best interest of Fenmore’s. At the hospital, Victor (Eric Braeden) will put J.T.’s name up on his tablet. He’ll frantically try to convey his message, but Nick and Nikki (Melody Thomas Scott) just won’t get it.

Afterward, Nick will spot the dark-haired mystery woman and call Paul (Doug Davidson). He’ll believe he found the person who shut off Victor’s life support. Of course, Y&R fans know that’s not true. J.T.’s to blame, but the mystery woman will still be on the hot seat. It turns out the new Jabot chemist, Helen, was the one visiting Victor.

Paul will suspect that maybe Jack ordered Helen to get the job done, but she’s actually Victor’s mistress! During a discussion with Nikki, Helen will mention the arrangement Nikki and Victor had. The Young and the Restless spoilers say Nikki will confess that it’s true, but she’ll still feel like she’s Victor’s one true love.

It sounds like an exciting episode’s on the way. We’ll give you updates as other Y&R details emerge. Stay tuned to the CBS soap and don’t forget to check CDL often for the latest Young and the Restless spoilers, updates and news.

Kyle’s definitely up to something… #YR pic.twitter.com/jENLKvQsAs