BY Heather Hughes on April 24, 2018 | Comments: one comment
Related : Soap Opera, Spoiler, Television, The Young and the Restless 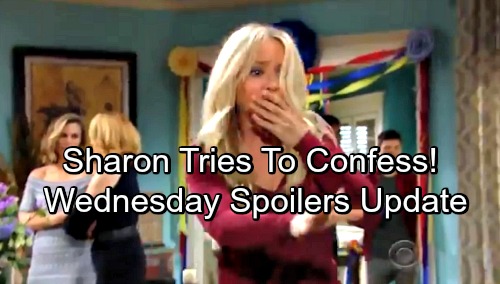 The Young and the Restless (Y&R) spoilers for Wednesday, April 25, tease that Victoria (Amelia Heinle) and Phyllis (Gina Tognoni) will discuss their concerns. Thanks to the camera Victor (Eric Braeden) installed, Paul’s (Doug Davidson) in the loop on J.T.’s (Thad Luckinbell) abuse. Victoria will pass the news along to Phyllis and they’ll fret about the investigation.

Phyllis will fear that another camera might’ve captured something upstairs. She’ll think it was wrong for Victor to invade Victoria’s privacy like that. It’s amazing how Phyllis thinks she is now Genoa City’s moral compass. Meanwhile, Victor will chat with Nick (Joshua Morrow) at the ranch. They’ll share some warm moments as Victor talks about Nick’s support in the hospital. Victor will shed a few tears and Nick will let his dad know that he loves him.

At Crimson Lights, Sharon (Sharon Case) will spot Reed (Tristan Lake Leabu) and offer some compassion. He won’t be in the mood for her kind words. Reed will gripe about J.T. taking off and refusing all contact. He’ll have a hard time believing his father would just abandon him like this.

Sharon’s guilt will make her wonder if the cover-up crew should come clean. She’ll mention the option to Nikki (Melody Thomas Scott), who will immediately shut it down. As for Reed, he’ll track down Billy and suggest that he can’t live with Victoria anymore. Reed will insist that he has to make a major change.

The Young and the Restless spoilers say Billy will take Reed back to Victoria’s place. He’ll support the teen as he gives Victoria his decision. Reed will want to attend a music boarding school in New Hampshire. Victoria will hate to see Reed go, but she’ll ultimately accept that this is what’s best for him.

After Reed talks about texting J.T., he’ll head up to his room. Victoria will break down in tears over this horrible situation. Back at the ranch, Victor will fill Nick in on J.T.’s abuse. The revelation will really leave Nick seething. He’ll warn that J.T.’s a dead man if he ever shows up in Genoa City again.

Later, Jack (Peter Bergman), Arturo (Jason Canela), Nikki and Nick will all discuss their latest project. When Nikki and Arturo speak alone for a moment, Victor will eavesdrop. He’ll hear them talking about meeting up later at the usual location.

Other Y&R spoilers say Nick will rant to Sharon about the abuse drama. He’ll be livid that J.T. would do that to his sister. Nick will also be upset that Victoria didn’t come to him herself. He’ll eventually vow to find J.T. and make sure Victoria stays protected.

The Young and the Restless spoilers say Sharon will battle some worries as Nick’s search intensifies. He could easily get too close to the truth! Over with Kyle (Michael Mealor), he’ll seek Ravi’s (Abhi Sinha) help. Ravi will be hesitant to do Kyle a favor, but he’ll eventually wonder what he needs. Kyle will promise to pay Ravi or get him some game tickets if he can restore the memory card.

It sounds like trouble’s brewing for the Abbott clan. We’ll give you updates as other Y&R details emerge. Stick with the CBS soap and don’t forget to check CDL often for the latest Young and the Restless spoilers, updates, and news.