The Young and the Restless Spoilers: Wednesday, August 1 – Devon Reels Over a Deadly Bombshell – Jack and Billy’s Battle Blows Up

BY Heather Hughes on July 30, 2018 | Comments: one comment
Related : Soap Opera, Spoiler, Television, The Young and the Restless 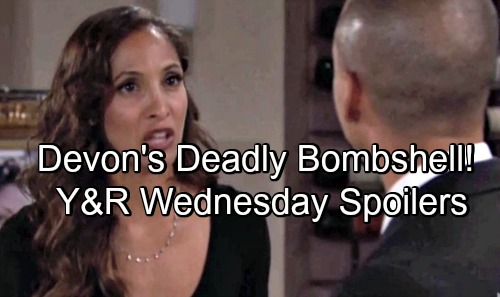 The Young and the Restless (Y&R) spoilers for Wednesday, August 1, tease that Jack (Peter Bergman) and Billy (Jason Thompson) will face off. Things have already been tense between them, but their battle will really get out of hand soon enough. Jack will undoubtedly criticize the way Billy’s running Jabot. He’ll point to some recent missteps and suggest that the company’s sinking fast.

Of course, Jack will also address how hard Billy’s been on Phyllis (Gina Tognoni). He’ll believe Billy’s gambling addiction has put him on a dark path again. Jack will want Billy to get off it before it’s too late. Unfortunately, Billy’s stubborn and can’t seem to admit he’s struggling. He’ll be waiting with plenty of insults and accusations, so that’s sure to infuriate Jack as well.

Elsewhere, Phyllis (Gina Tognoni) will have a crucial message to pass along. There are a few possibilities here. Phyllis might get in touch with Kyle (Michael Mealor) and reiterate her warning to stay quiet. She could come up with specific consequences in hopes of keeping his mouth shut.

Too bad the cat’s out of the bag! Kyle blabs to Summer (Hunter King) in Tuesday’s episode, so she may spread the news on Wednesday. In other words, Phyllis’ message might be too late. You can bet a real mother-daughter war’s brewing.

However, there are other options for this critical message. Phyllis might tell Lauren (Tracey E. Bregman) that Nick’s (Joshua Morrow) moving forward with his Fenmore’s pursuit. She could even reach out to Devon (Bryton James) and remind him of how much Hilary (Mishael Morgan) loved him.

Speaking of Devon, he’s about to face a crushing blow. The Young and the Restless spoilers say his world will come crumbling down, so this could involve Lily (Christel Khalil) and that red light she ran. Y&R fans know Lily didn’t mean to cause the crash, but she’s still the reason Hilary’s dead.