BY Heather Hughes on August 6, 2018 | Comments: one comment
Related : Soap Opera, Spoiler, Television, The Young and the Restless 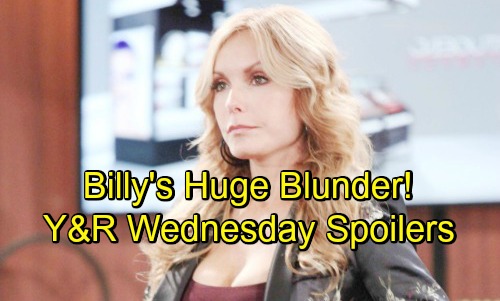 The Young and the Restless (Y&R) spoilers for Wednesday, August 8, tease that Billy (Jason Thompson) will call a crucial meeting. He’ll finally reveal the details of the secret project he’s been working on. Billy will ask the Jabot team to attend along with the Fenmore’s gang. The news affects both sides of this partnership, so Billy will want everyone to be prepared.

Y&R fans can expect Billy to drop quite a bomb. He’ll announce that he’s opening a string of Jabot boutiques that will hopefully boost profits. Unfortunately, that won’t be the case for Lauren (Tracey E. Bergman). These boutiques will compete with Fenmore’s cosmetic counters, so she won’t be pleased by Billy’s updates.

The Young and the Restless spoilers say a fierce shouting match is on the way, but Billy won’t budge on his big idea. He’ll argue that even if he wanted to, he couldn’t back out now. Lauren will be ready to walk over this, so she’ll probably reach out to Nick (Joshua Morrow) soon enough.

Naturally, Phyllis will be stuck in the middle of the mess Billy’s made. She’ll be incredibly frustrated over his latest decision.

Other Young and the Restless spoilers say Nikki (Melody Thomas Scott) will push Sharon (Sharon Case) to her limit. It’s clear that Sharon’s been under a lot of stress lately. First, there was the girls’ night fiasco. That resulted in J.T.’s (Thad Luckinbill) death as well as a cover-up and months of secrecy.

Next, Nick impersonated J.T. and threw Sharon for a loop. Now he’s calling for major changes to their lives – like moving out of the cottage and off the ranch. Of course, the pressure’s also rising within the cover-up crew. This alliance could be on the verge of falling apart if they’re not careful.

It looks like Nikki will go one step too far, so Sharon will really let her have it. Whether this is about the J.T. secret or Nick’s war with Victor, Sharon will decide she’s had enough!

She’ll urge Nikki to back off, so let’s hope she can cool down and keep her act together. Nikki, Phyllis and Victoria (Amelia Heinle) don’t need a loose cannon right now.

Finally, Victor will seek a truce with someone. He still seems angry with Nick, so maybe we should explore other options. Neil (Kristoff St. John) might be a good person to make amends with.

After all the Hilary drama, Victor might have a heart and bury the hatchet. He could let go of any hostility over the insider tip Hamilton-Winters used.

However, Victor doesn’t do anything without a goal in mind. No matter who he repairs the damage with, there’ll have to be something in it for Vic! We’ll keep you posted as other Y&R info emerges. Stay tuned to the CBS soap and don’t forget to check CDL often for the latest Young and the Restless spoilers, updates, and news.