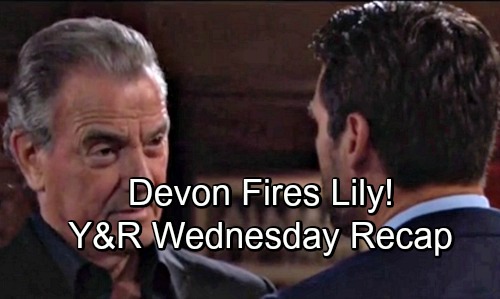 The Young and the Restless (Y&R) spoilers and recap for Wednesday, August 8, tease that Billy (Jason Thompson) will make Phyllis (Gina Tognoni) wait on his Jabot secret. He’ll hint that she surely has a secret or two of her own, so Phyllis should squirm a little! Later, Phyllis will give Nick (Joshua Morrow) updates on the “Philly” reunion. He’ll be glad things worked out for them in the end.

Lauren (Tracey E. Bregman) will join Phyllis and Nick’s meeting soon after. She’ll want to make a pitch about moving Fenmore’s over to Dark Horse. Unfortunately, Nick will have bad news instead. He’ll confess that he’s reconsidered and will be focusing on real estate. Lauren will understand, but she’ll want Nick to reach out if he changes his mind again. She’ll be eager to part ways with Jabot.

Meanwhile, Cane (Daniel Goddard) will worry about Lily’s (Christel Khalil) fate. She’ll try to put her own fears aside and concentrate on Devon (Bryton James). Lily will hope that turning herself in helps him heal in some way. Afterward, Sharon (Sharon Case) will bump into them and suggest that Lily did the right thing by confessing. She’ll think Lily was awfully brave to step up like that.

Next, Sharon will meet up with Nick to discuss the housing situation. He’ll keep pushing for a brand-new place, but Sharon will insist on sticking with their current home. At Hamilton-Winters, Devon will open up to Neil (Kristoff St. John) about a dream he had. Hilary (Mishael Morgan) was alive and well in it, so he had a brief moment of peace.

Neil will encourage Devon to keep moving forward like Hilary would’ve wanted. Once Lily arrives, she’ll explain that she came clean to Paul (Doug Davidson) and could face 20 years in prison. Neil (Kristoff St. John) will be rattled over Lily’s revelation, but Devon certainly won’t mind. His wife and child are gone for good, so he won’t be in any hurry to forgive Lily.

Talk will turn to GC Buzz and the need for witty banter. Devon will admit it’s time to find a new cohost for Mariah (Camryn Grimes), so Lily will offer to pitch in with the search. Unfortunately, Devon will take it the wrong way. He’ll feel like Lily’s trying to score the position for herself, so he’ll tell her off and fire her from the company entirely.

Over with Ashley (Eileen Davidson) and Kyle (Michael Mealor), they’ll track down Lauren (Tracey E. Bergman) and Phyllis. Y&R spoilers say Ashley will urge Lauren to be patient. She’ll hint that things are going to change for the better at Jabot soon.

Nearby, Summer (Hunter King) will spy on the meeting and blab to Billy. He’ll determine that he needs to go ahead and reveal what he’s been up to. After everyone gathers in Billy’s office, he’ll confess that he’s opening 30 new boutiques. This major expansion will worry Ash and enrage Lauren. These boutiques will definitely cause stiff competition for Fenmore’s.

At the cottage, Nikki (Melody Thomas Scott) will demand Sharon’s help. She’ll think Sharon can help Nick make peace with Victor (Eric Braeden). The Young and the Restless spoilers say Sharon will shut down the idea. She’ll still be angry about Victor targeting her at the custody hearing, so Nikki will be out of luck.

Meanwhile, Victor will bump into Nick at the athletic club. He’ll be hoping to spend time with Christian (Jude and Ozzy McGuigen), so he’ll point out that he still loves his son. Nick won’t be keen on making amends, so Victor will reveal that he’s got serious ammo. He’ll point out that Nick ratted him out to the feds and that won’t be forgotten.