BY Jessica Jones on December 24, 2018 | Comments: one comment
Related : Soap Opera, Spoiler, Television, The Young and the Restless 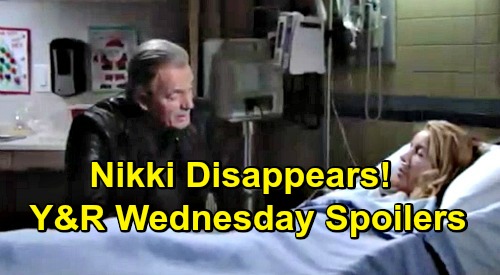 The Young and the Restless (Y&R) spoilers for Wednesday, December 26, tease that Jack Abbott (Peter Bergman) will have a bittersweet holiday. It’ll be Christmas in Genoa City, so Jack will spend some time with his mom.

Dina Mergeron (Marla Adams) will happily chat with Jack, but it looks like she’ll have no idea who he is. Her mental state is declining, but Jack will choose to reflect on better times.

As Dina listens, Jack will tell warm stories of the past and hope he can keep the Christmas magic alive. Even if Dina’s memory can’t be jogged, she’ll have fun hanging out with her son. All Jack and Dina have is the present, so they’ll accept that and enjoy it for what it is.

Meanwhile, Devon Hamilton (Bryton James) will struggle to let go of his own past. He won’t feel like there’s much left to enjoy without Hilary Hamilton (Mishael Morgan) around. Devon’s world crumbled when he lost his wife and their unborn child. He desperately wishes his family was still intact, but at least his sister’s in town now.

Ana Hamilton (Loren Lott) will do her best to help Devon through this difficult holiday. He’s stuck in darkness right now, but The Young and the Restless spoilers say there’s light at the end of the tunnel.

Devon just has to hang in there and keep coping with more positive strategies. Y&R fans know he’s been throwing himself into his music label, which seems like a helpful plan.

Of course, that’s also led to some conflict with Ana, but they may put their issues on hold in honor of Christmas. Devon needs a shoulder to cry on, so Ana surely won’t leave him without one. Over with Nikki Newman (Melody Thomas Scott), she’ll disappear from her hospital room.

Since Victor Newman (Eric Braeden) returns to his love in Tuesday’s Y&R episode, December 25, perhaps he’ll be the kidnapper on Wednesday. However, we should also mention that someone mysterious will be lurking in GC.

Since Victor’s already been revealed, maybe that means the evidence planter will surface. If Victor leaves Nikki’s side to avoid the cops, it’s possible someone else could sneak in and steal Nikki from the hospital. Regardless, the Newman clan will hit the panic button later this week!

The Young and the Restless spoilers say some great scenes are ahead on the CBS soap. We’ll give you updates as other news comes in. Stay tuned to Y&R and don’t forget to check CDL often