The Young and the Restless Spoilers: Wednesday, May 16 Update – Jack’s Car Accident – Victoria Caught – Abby and Arturo Hook Up

BY Heather Hughes on May 15, 2018 | Comments: 2 comments
Related : Soap Opera, Spoiler, Television, The Young and the Restless 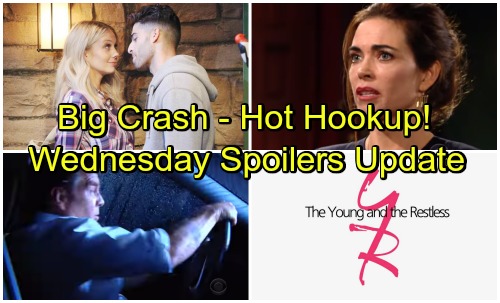 The Young and the Restless (Y&R) spoilers for Wednesday, May 16, tease that Jack’s (Peter Bergman) loved ones will grow increasingly concerned. At home, Ashley (Eileen Davidson) and Kyle will compare notes on their searches. Neither one of them was able to track Jack down.

Dina (Marla Adams) will fret about “John,” but she’ll get some reassurance from her family. Meanwhile, Jack will sulk with liquor at the Abbott cabin. He’ll guzzle most of the bottle and make a short video about the Dina interview drama. Afterward, Jack will insist that the Abbotts are a myth as he burns the family memory book.

At Newman Enterprises, Abby (Melissa Ordway) will pop in her father’s office. She’ll think Victor (Eric Braeden) will be to blame if Jack lands in harm’s way. Victor will once again deny altering the footage, but Abby will refuse to believe he’s innocent.

Over with Victoria (Amelia Heinle), she’ll be rattled by Paul’s (Doug Davidson) call. He’ll want to meet about J.T.’s (Thad Luckinbell) texts as soon as possible. Victoria will arrive in Victor’s office soon after. She’ll be put in charge of Ashley’s project until the Jack drama’s sorted out. That’ll infuriate Abby, so she’ll leave in a huff.

In the hallway, Abby will fill Paul in on Jack’s vanishing act. He’ll agree to spread the word to his officers. Paul will also fish for J.T. investigation info. When he asks if Abby dropped by Victoria’s place that evening, she’ll admit that she didn’t. Uh-oh. The cover-up gang’s stories are falling apart!

After reconvening with Kyle and Ashley, Abby will learn there’s no news on Jack. She’ll decide to check the Abbott cabin and Arturo (Jason Canela) will join her. He won’t want Abby to go alone since a storm’s brewing. The Young and the Restless spoilers say they’ll take off in Arturo’s truck.

Once they make it to the cabin, Abby will see the fire and note that Jack’s been there. Arturo will head outside with her to see if Jack might be fishing. They’ll get caught in the rain, so they’ll naturally return to strip off those wet clothes! Afterward, they’ll open up to each other and lean in for some close moments.

Other Y&R spoilers say Jack will blast music as he speeds in his car. He’ll crash in the storm, so this could be a dire situation. Back with Victoria, Paul will corner her and poke holes in her version of events. He’ll insist that he’s been deceived. Paul will snap that someone at that party knows something, so Victoria will vow to confess. Too bad she’s not going to divulge whole truth!

At the ranch, Kyle and Victor will discuss their agreement. If Kyle wants a spot at Newman, he’ll have to keep serving as a Jabot informant. Kyle will reveal that Billy’s (Jason Thompson) on the throne now. He’ll add that Ashley’s trying to control Billy’s strategies. The updates will bring Victor glee, so he must have a sneaky plan in motion.