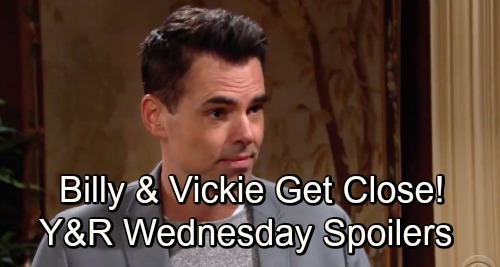 The Young and the Restless (Y&R) spoilers for Wednesday, November 21, tease that Victoria (Amelia Heinle) will feel like the walls are closing in. She’s trying to handle the pressure of the J.T. (Thad Luckinbill) investigation, but her life is still spiraling out of control. Now Victoria’s got the added drama of handling Tessa (Cait Fairbanks) and her newfound knowledge. It’s all just too much!

That’s why Victoria will need a shoulder to lean on. She’s been sworn to secrecy by the cover-up crew, so it’s doubtful she’ll spill more than she has to. However, Victoria will want some form of support. Just talking to a friendly face and doing some vague venting might help.

The Young and the Restless spoilers say Billy (Jason Thompson) will pitch in on that. He’ll be happy to listen and offer advice if he can. Naturally, Victoria will let Billy rant as well. He has to be feeling a little lost, especially in terms of his love life. Y&R fans can expect some warm moments for these exes, so maybe a “Villy” reunion is on the horizon.

Over with Tessa, she’ll struggle with doubts and fears. In Tuesday’s new Y&R episode, November 20, Tessa lies about donating the money to charity and handing over all the footage. In reality, Tessa stashes the cash in a stuffed bear along with a backup flash drive. Of course, we also know Mariah (Camryn Grimes) is playing Tessa about getting back together. Tessa may sense that it’s just a little too good to be true.

This isn’t Tessa’s first rodeo, so she knows better than to give up what could protect her. Still, part of Tessa will hate what she’s doing. She’ll pull the teddy bear out of the box she taped up, so we could see her wondering if she’s made the right call. Since Victoria seems to have a vicious plot brewing, Tessa probably has the right idea! Regardless, lies will continue to be a huge issue for “Teriah.”

Other Young and the Restless spoilers say Devon (Bryton James) will crumble under the weight of his grief. He’ll let his emotions pour out during an honest chat with someone. Devon misses Hilary (Mishael Morgan) terribly, so he’ll feel like he’s drowning in sorrow. He’ll just wish there was a way to move past all this pain.

Next week, Devon’s sister, Ana Hamilton, will show up in town. Ana’s (Loren Lott) arrival should bring some happiness to Devon’s life again, so stay tuned for the better days ahead. We’ll give you updates as other Y&R news comes in. Stick with the CBS soap and don’t forget to check CDL often for the latest Young and the Restless spoilers, updates and news.