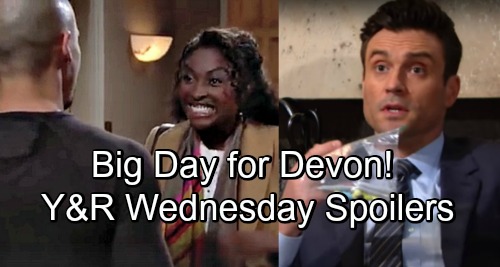 The Young and the Restless (Y&R) spoilers for Wednesday, November 28, tease that Devon (Bryton James) will get a big surprise. Ana Hamilton will make her way back to Genoa City in the form of Loren Lott. The former American Idol finalist is stepping into the role just in time for Devon’s latest crisis.

When Devon hears a knock at the door, he’ll open it up and see a huge smile in front of him. Ana will throw her arms around her brother and hope he doesn’t mind her unexpected arrival. She’ll be anxious to spend some time together and see what’s going on in each other’s world.

Unfortunately, Devon’s whole life pretty much revolves around grief right now. It’s been that way ever since Hilary (Mishael Morgan) and there’s no sign of light at the end of the tunnel. The Young and the Restless spoilers say Cane will discover some drugs at some point on this week’s new Y&R episodes. It’s clear that Devon’s getting worse instead of better, so he needs his loved ones to step up.

Let’s hope Ana can be Devon’s rock when he needs her. She’ll certainly provide comfort and help Devon move on, but it won’t happen overnight. Y&R fans will see a slow journey for Devon and it’s just getting started. Perhaps new love will head Devon’s way sooner or later. Hilary would undoubtedly want Devon to let go and find happiness again.

Over with Kyle (Michael Mealor), he’ll react to Lola’s (Sasha Calle) latest shocker. Kyle’s been itching to take things to the bedroom, but that’s not what Lola has in mind. In Tuesday’s episode, Lola explains that she’s a virgin. Kyle will probably try to be cool about it on Wednesday, November 28, but Lola will sense that he’s got some issues with her revelation.

Is Kyle willing to wait for the woman he’s falling in love with? Lola will make it clear where she stands, so Kyle will have to decide if he can get on board with that. The Young and the Restless spoilers say this could cause a setback, but Kyle and Lola should work through it eventually. If they can overcome Summer’s (Hunter King) hurdles, they can get over just about any bump in the road.

It looks like some fantastic drama’s brewing in Genoa City. We’ll give you updates as other Y&R news comes in. Stay tuned to the CBS soap and don’t forget to check CDL often for the latest Young and the Restless spoilers, updates, and news.