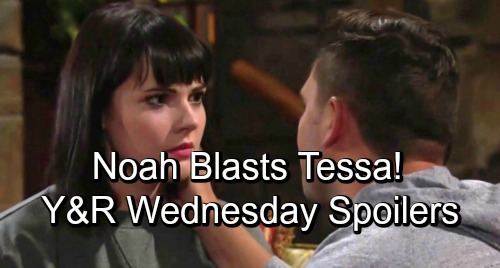 The Young and the Restless (Y&R) spoilers for Wednesday, October 10, tease that Nick (Joshua Morrow) won’t take no for an answer. He can’t accept that Sharon’s (Sharon Case) really through with him for good, so he’ll keep trying to win her back. Nick desperately wants to repair the damage and find some way to be a family again. Unfortunately, he’ll face more opposition soon enough.

It looks like Rey (Jordi Vilasuso) will manage to distract Sharon from her pain. The Young and the Restless spoilers say Sharon and Lola (Sasha Calle) will have some fun at Rey’s apartment. Things will get messy thanks to the updates Rey’s making. It appears some paint and water splashing will go down.

Y&R fans can expect Nick to become a party crasher on Wednesday. It makes sense that it’ll be this one he interrupts. Of course, Sharon will just reject Nick all over again. She’s not interested in making amends, so Nick’s got his work cut out for him.

Other Young and the Restless spoilers say Noah (Robert Adamson) will corner Tessa (Cait Fairbanks) and deliver a warning. He’ll want to make his position clear about her relationship with Mariah (Camryn Grimes). Noah’s over Tessa, so he’s not causing a big fuss over this. However, he’ll undoubtedly caution Tessa not to blow it this time. Noah will just want to make sure Mariah’s heart is protected.

Back with Sharon, she’ll have another shouting match with Phyllis (Gina Tognoni). After Phyllis gets a threatening letter, she’ll think Sharon’s behind it. That’ll bring some hurled accusations and insults. When Sharon receives the same note, they’ll realize this is a force greater than their feud.

Victoria (Amelia Heinle) and Nikki (Melody Thomas Scott) will pipe up about their own letters soon. The Young and the Restless spoilers say the cover-crew will have a quiet meeting. They’ll discuss how they’re going to tackle their latest crisis, but Nikki and Victoria will end up taking charge of the situation. That’s for the best since there’s so much drama surrounding Phyllis and Sharon.

Someone out there intends to make the J.T. (Thad Luckinbill) secret-keepers pay, but will he or she succeed? We’ll keep you posted as other Y&R news comes in. Stay tuned to the CBS soap and don’t forget to check CDL often for the latest Young and the Restless spoilers, updates, and news.