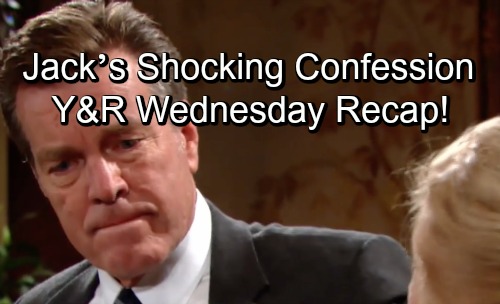 The Young and the Restless (Y&R) spoilers update and recap for Wednesday, October 24, tease that Traci (Beth Maitland) will reflect on the past. As she gazes at an old Abbott family photo, Traci will have memories of John (Jerry Douglas), Dina (Marla Adams), Jack (Peter Bergman) and Ashley (Eileen Davidson). We’ll see younger versions of the characters in these newly created flashbacks.

Traci will recall how John bought Dina a new car and wanted to take it out. Dina brushed John off, so Ashley pushed their mom to change her plans and come along. Jack was quick to defend Dina, but John ended up doting on Ashley. In fact, Jack piped up about Ashley always being their dad’s favorite.

Dina eventually had a heart-to-heart with Jack about needing to go away for a while. John later urged her to stay, but assumed their family just wasn’t enough for her. That’s it for the flashbacks, so let’s get back to the main action. The Young and the Restless spoilers say Ashley will reach out to Billy (Jason Thompson) on Wednesday. She’ll offer an apology and hope Billy can accept it.

Unfortunately, Billy won’t be interested. He’ll suggest Ashley’s learning what it’s like to be the black sheep of the family. Meanwhile, Traci (Beth Maitland) will push Kyle (Michael Mealor) to admit what happened with Dina (Marla Adams). Kyle won’t make any contract confessions, so Traci will call a family meeting. She’ll want the whole fam together to talk through their issues.

Traci will argue that their conflict is tied to the past, but they’ve let it bleed into the present. She’ll hope they can make some changes ASAP. Jack no longer needs to feel like he’s in competition with Ashley. As for any lingering resentment toward Dina, it’s admirable that she came home to patch things up. Now that Dina’s mind is fading, they have to enjoy the time they have left with her.

Y&R spoilers say Jack will eventually come clean about the contract John signed. He’ll let Ashley know that she controls all the patents and products she created. Over with Cane (Daniel Goddard), he’ll get upset as he waits to see Lily (Christel Khalil). Cane will eventually learn that Lily can’t have any visitors. She defended another inmate during a fight, so she’s rattled and being targeted now.