BY Heather Hughes on September 11, 2018 | Comments: one comment
Related : Soap Opera, Spoiler, Television, The Young and the Restless 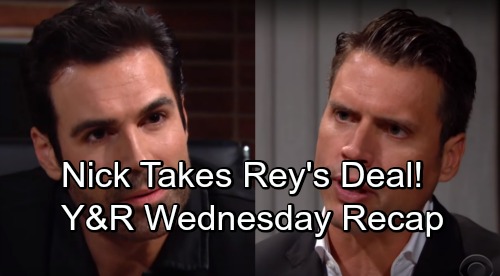 The Young and the Restless (Y&R) spoilers update and recap for Wednesday, September 12, tease that Nick’s (Joshua Morrow) arrest will spark a debate. Sharon (Sharon Case), Mariah (Camryn Grimes) and Abby (Melissa Ordway) will all consider who ratted Nick out. Abby will confess that she might’ve overshared a bit, but Victor (Eric Braeden) will end up getting the blame when he walks in.

Nikki (Melody Thomas Scott) will insist Victor didn’t turn Nick in for impersonating J.T. (Thad Luckinbill). As she works to settle everyone down, Mariah will note that Rey (Jordi Vilasuso) may just be a solid detective. After GC Buzz’s next guest suddenly cancels, Abby will inform Mariah that she might be able to pitch in. She’ll have an idea that revolves around long-lost relatives and big secrets.

Meanwhile, Summer (Hunter King) will find herself alone in her hotel suite. She’ll text Kyle (Michael Mealor), but he’ll suggest that he doesn’t have time for her right now. An irritable Summer will show up at Crimson Lights soon after. She’ll drive Tessa (Cait Fairbanks) nuts with a complex coffee order and take jabs about the reason she got the job.

Tessa will contend that her relationship’s off-limits when it comes to Summer’s insults. Summer will suggest that she doesn’t have any problems with “Teriah.” She’ll think it’s great that they both wanted each other and argue that it doesn’t always work out like that. Tessa will urge Summer to open her heart to the right guy and stop giving people so much attitude.

Back with Mariah, she’ll tell Kyle (Michael Mealor) about Tessa’s love declaration and suggest that things are good between them. Talk will turn to Kyle’s apparent romantic issues. It’ll take some work, but Mariah will pry the bet news out of him. She’ll be glad Kyle didn’t sleep with Summer. It’s clear that Kyle wants more than sex, so Mariah will worry he’ll face heartache if he pursues this any further.

Once Mariah begins GC Buzz, Abby will show off the picture Jack’s (Peter Bergman) been pondering. She’ll ask the viewers to pass along any info about the mystery man. The Young and the Restless spoilers say Victor will look stunned nearby. He’ll fib to Nikki about the reason, but it’s really because he believes the man in the photo is his own father.

At the police station, Nick will deny colluding with J.T. He’ll bicker with Rey, who’s got a witness that claims Nick and J.T. worked together. After Brittany (Lauren Woodland) arrives, Nick will confess to her privately. He’ll note that Rey’s got part of the story. Nick will suggest that if Rey figures out the rest, he’ll learn he was working to sabotage Newman Enterprises.

Other Y&R spoilers say Phyllis (Gina Tognoni) will remain concerned about Billy’s (Jason Thompson) gambling. She’ll want to help him keep his desires in check, but his latest horse bet will bring more worries. After a tough loss, Phyllis will seem distraught over Billy’s plan to bet again.

Back with Rey, he’ll offer Nick a deal. The Young and the Restless spoilers say Nick will get full immunity if he comes clean about his involvement with J.T. Rey will just be anxious to get to the bottom of his disappearance, so he’ll think Nick’s admission would be useful.

After conferring with Brittany, Nick will sign the agreement and insist that he hasn’t seen J.T. since April. He’ll shock Rey by declaring that he was J.T. Nick should explain the rest of his impersonation plot soon, so stay tuned. We’ll give you updates as other Y&R details emerge. Stick with the CBS soap and don’t forget to check CDL often for the latest Young and the Restless spoilers, updates, and news.