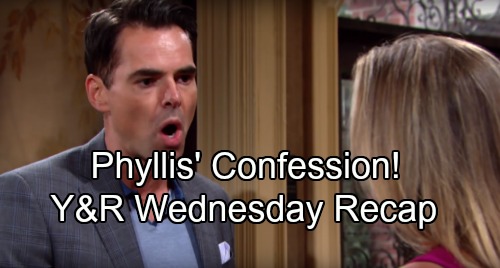 The Young and the Restless (Y&R) spoilers update and recap for Wednesday, September 19, tease that Sharon (Sharon Case) will have some big news. She’ll inform Nick (Joshua Morrow) and Mariah (Camryn Grimes) that she’s giving the student address at her graduation. They’ll naturally think Sharon’s going to do great. Mariah will offer some tips since she’s used to hosting on GC Buzz, so Sharon will be grateful.

At her graduation, Sharon’s speech will be touching and powerful. Mariah and Nick will happily cheer her on in the crowd. Later, they’ll gather back at the house to take pictures and make some toasts. After Mariah heads off to the stables, Nick and Sharon will use the quiet time to make love.

Meanwhile, Phyllis (Gina Tognoni) will fill Billy (Jason Thompson) in on her chat with Summer (Hunter King). She’ll note that it wasn’t pretty and add that Summer truly wanted to hurt her. Over with Kyle (Michael Mealor), he’ll meet with Ashley (Eileen Davidson) and insist that Billy’s stealing from the company. Kyle will twist the story to cover up the trap he set, but Ashley will still be suspicious.

Nevertheless, Kyle will talk about the wire transfer and call for action. Ashley will want to see Billy’s actual financial records, but that plan will hit a snag. They’ll need a password to access them. Of course, Kyle won’t let that little hurdle stand in his way. He’ll pay Gloria (Judith Chapman) a visit and come clean about the setup. Kyle will warn that Billy’s going to take her down if she doesn’t help him.

Gloria will ultimately give Kyle the password out of fear. Y&R spoilers say Kyle will return to Ashley and insist that $500,000 was transferred to a gambling organization. He’ll argue that that Billy’s embezzling and out of control.

Elsewhere, Billy will tell Phyllis about his six-figure buy-in with the elite gambling group. Phyllis will finally confess that she’s not OK with all this. Billy’s gambling is really starting to feel dangerous. The Young and the Restless spoilers say Billy will get riled over Phyllis’ admission. He’ll feel like instead of supporting him, she just wants to fix his problem.

Across town, Paul (Doug Davidson) and Rey (Jordi Vilasuso) will spar at the police station. They’ll clash over the J.T. (Thad Luckinbill) case and Paul’s desire for fast results. Things will get a bit heated, but they’ll eventually settle down and discuss some case details. Rey will be particularly interested in the girls’ night gang. He’ll have a strategy to crack Sharon, the weakest link.

The Young and the Restless spoilers state that Rey will suggest hiring Sharon as a victim liaison. They can keep her close at the GCPD and hopefully pry some answers out of her. Will Sharon take the bait and set herself up for trouble? We’ll give you updates as other details emerge. Stick with Y&R and don’t forget to check CDL often for the latest Young and the Restless spoilers, updates and news.