BY Marcy Cohen on September 24, 2018 | Comments: one comment
Related : Soap Opera, Spoiler, Television, The Young and the Restless 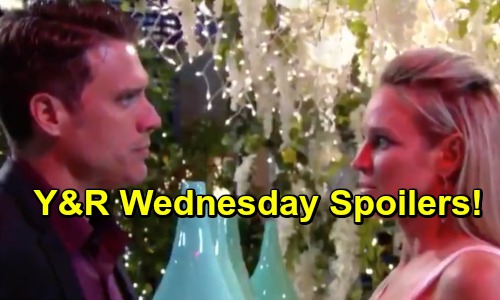 The Young and the Restless (Y&R) spoilers for Wednesday, September 26, tease that Nick (Joshua Morrow) will contemplate his future with Sharon (Sharon Case). In Tuesday’s episode, Nick stuns his bride-to-be by showing off a pic of their new dream house. He’s hoping to move in right after their wedding, but Sharon will remain concerned.

Nick and Sharon’s relationship should be in an awkward place on Wednesday. Her reaction to this surprise may stir up more worries. Nick will determine that secrets in any form spell trouble. If Nick expects Sharon take a leap like this, he has to be honest. That means coming clean about anything that could hang over their marriage.

Nick will resolve to confess his betrayal. Y&R fans will recall that he had a one-night stand with Phyllis (Gina Tognoni). Of course, Nick will think he can explain the whole situation and make this right. He found Sharon’s engagement ring beforehand, so he thought they were splitting up. Nick will hope to reassure Sharon of his love and smooth things over before their ceremony.

However, The Young and the Restless spoilers say Phyllis could get in the way. She’ll feel like Nick’s out of his mind if he thinks Sharon will accept his excuses. Meanwhile, Sharon will face resistance as well. Nikki (Melody Thomas Scott) will worry that their web of lies will come untangled if Sharon blabs to Nick. She won’t want Nick brought in the deadly J.T. (Thad Luckinbill) circle.

Will Nikki talk Sharon off the ledge or will Sharon move forward with her plan? Regardless, we’re in for some high-stakes drama! Over with Devon (Bryton James), he’ll reflect on the loss of Hilary (Mishael Morgan) and their baby. Anyone who’s experienced grief knows that there are good days and bad days. Unfortunately, this will most definitely be a bad day.

Devon may also struggle with the guilt of Lily’s (Christel Khalil) situation. This isn’t how he wanted any of this to turn out. Who will be there for Devon in his time of need? Nate (Brooks Darnell) and Shauna (Camryn Hamm) seem like great options, but someone surprising could just as easily step up.

Still, Devon will have to work through some of this on his own. No one can truly understand what he’s going through, so he’ll find his sorrow difficult to cope with. The Young and the Restless spoilers say Devon will just do his best to press on. We’ll give you updates as other news comes in. Stick with Y&R and don’t forget to check CDL often for the latest Young and the Restless spoilers, updates and news.