BY Heather Hughes on September 25, 2018 | Comments: one comment
Related : Soap Opera, Spoiler, Television, The Young and the Restless 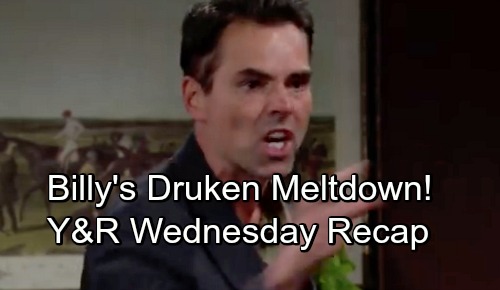 The Young and the Restless (Y&R) spoilers for Wednesday, September 26, tease that Neil (Kristoff St. John) will give Devon (Bryton James) some advice. At Neil’s penthouse, Devon will be pushed to attend Nick’s (Joshua Morrow) bachelor party. Neil will think Hilary (Mishael Morgan) would want Devon to start moving on.

While Devon considers Neil’s guidance, Nikki (Melody Thomas Scott) will give Sharon (Sharon Case) a warning. She’ll insist that if Sharon shares the J.T. (Thad Luckinbill) shocker, so many lives will be destroyed. Suddenly, Mariah (Camryn Grimes) will interrupt and hustle the ladies out to the party bus. They’ll join the rest of the gang and head over to the roof deck for some fun.

At the athletic club, Jack (Peter Bergman) will make a promise to Nick. He’ll insist they’re going to have a gentlemen’s evening and keep things mellow. The Young and the Restless spoilers say Nick will bring up Sharon’s disappointment lately. He’ll admit to having some concerns, too. Nick won’t like the idea of turning into Victor (Eric Braeden) and heading down the same dark path.

Soon after, the other bachelor party guests will arrive. Arturo (Jason Canela), Neil and Devon will all join the bash in Nick’s honor. At The Dive Bar, Summer (Hunter King) will rope some of the ladies into a dance. Nearby, Nikki will give Victoria (Amelia Heinle) and Phyllis (Gina Tognoni) the heads-up. She’ll reveal that Sharon wants to tell Nick the truth about J.T.

Later, Mariah will give a heartfelt toast about Nick and Sharon’s relationship. She’ll suggest that they taught her how important it is to be honest. Mariah will wonder if anyone else wants to speak. There’ll be some awkwardness as Sharon’s frenemies try to come up with something.

Back downstairs, Devon will hear about Nick’s dream home plans. He’ll reflect on the life he wanted to build with Hilary and the children they would’ve had. Devon will realize he needs to call it a night. Before he heads out, he’ll encourage Nick and the guys to kick things up a notch.

When the bachelor party crew appears on the roof deck, Mariah will worry that Sharon’s shindig is doomed. It won’t be long until Billy (Jason Thompson) shows up drunk. Billy will spar with Jack (Peter Bergman) and Phyllis (Gina Tognoni) before Summer walks over. She’ll wonder if he wants her to take him home, but he’ll assume she’s up to her pathetic tricks again.

After Billy staggers and pushes Phyllis into a waiter, Jack will intervene. He’ll insist that Billy’s leaving right now. Jack will add that Billy needs to live up to the family name, but Billy will think his downfall is exactly what Jack wants. Afterward, Jack will confide in Nick. He’ll express regret over the past and letting Phyllis go.

Meanwhile, Y&R spoilers say Sharon will stand her ground. She’ll insist on telling Nick what really happened to J.T. Nick will decide to make a huge confession of his own. He’ll tell Phyllis he’s going to admit they had a one-night stand, but she’ll fear it could cost him his relationship.

The Young and the Restless spoilers say Nick and Sharon will approach each other to come clean. Will they actually do it? It looks like they may bail at the last second, so stay tuned to see what stops them. We’ll give you updates as other Y&R news comes in. Stick with the CBS soap and don’t forget to check CDL often for the latest Young and the Restless spoilers, updates, and news.