BY Heather Hughes on September 3, 2018 | Comments: one comment
Related : Soap Opera, Spoiler, Television, The Young and the Restless 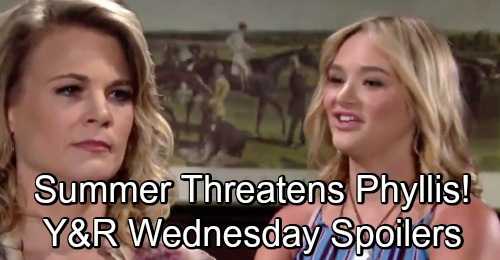 The Young and the Restless (Y&R) spoilers for Wednesday, September 5, tease that Summer (Hunter King) will finally make it back from her cruise, which was really a trap. Phyllis (Gina Tognoni) made sure her daughter was off floating on Jaboat without any way to reach out. That kept Summer busy for a little while, but the peace couldn’t last. Phyllis’ problems are far from over!

Summer will return on Wednesday, but you can probably guess that she won’t be in a great mood. The Young and the Restless spoilers say another fierce faceoff’s on the way. Summer will rant about her mom trying to get rid of her. She’ll argue that the pressure must really be getting to both Phyllis and Billy (Jason Thompson). Summer will think that stunt proves Phyllis views her as a threat.

That may be true, but Phyllis won’t show that she’s worried. She’ll contend that Summer just got what she deserved. Since Summer was planning to seduce Billy on his business trip, Phyllis had to fight fire with fire. Next, Phyllis will drop another bomb on her mini me. Summer will find out that Billy and Phyllis moved to the Abbott mansion, so that’ll be something else for her to grumble about.

Y&R fans know that Summer wants to be around Billy. She’s hoping that as they spend more time together, she can ultimately wear him down and get him in bed. Now that Summer and Billy are under different roofs, the plan’s going to be harder.

Nevertheless, you can bet Summer will keep fighting. She’ll let Phyllis know that this is just a minor hurdle. The Young and the Restless spoilers state that Summer will even make a serious threat. She’ll bring up Phyllis and Nick’s (Joshua Morrow) one-night stand, which continues to hang over them. Nick paid Summer to keep quiet, but she’ll hint that she could always change her mind.

Phyllis and Summer will have a heated argument, but they’ll both be wasting their breath. Playing dirty is the only way to win here! Meanwhile, Kyle (Michael Mealor) will do something that appears heroic. Will this involve controlling Phyllis and Summer’s feud or perhaps his mission to take down Billy?

Just because it seems heroic doesn’t mean it’ll turn out that way in the end. Kyle might make Billy think he’s helping him while he’s plot’s still in play. If The Young and the Restless wants to make Kyle a real hero, he could offer to help Tessa (Cait Fairbanks) find a place to live or come up with cash. Mariah would certainly appreciate that.

Regardless, Y&R has some fantastic drama in store. We’ll give you updates as other news comes in. Stay tuned to the CBS soap and don’t forget to check CDL often for the latest Young and the Restless spoilers, updates and news.