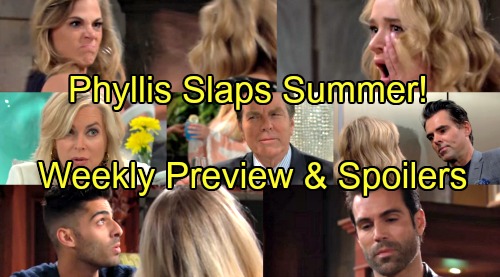 The Young and the Restless (Y&R) spoilers  for August 20-24 tease that some stunning developments are on the way. First, we’ll see some movement in the J.T. (Thad Luckinbill) case. That’ll be thanks to Rey’s (Jordi Vilasuso) sneakiness. He’ll start by setting up an encounter with Victor (Eric Braeden) and Nikki (Melody Thomas Scott). Rey will turn on the charm and most likely convince them he’s harmless.

However, Rey will secretly be making progress in his investigation. He’ll keep at it by becoming Sharon’s (Sharon Case) new pal. The Young and the Restless spoilers say Rey will find excuses to hang out with Sharon. He’ll even stop by the cottage and lull her into a false sense of security. Sharon will have no reason to think Rey’s up to something, so that’ll help him as he digs for the truth.

Meanwhile, Ashley (Eileen Davidson) will uncover a shocker. She’s been working against Billy (Jason Thompson) with Kyle (Michael Mealor) as her ally, so this may involve their grand plan. If Ashley gets evidence of all the yacht drama or some other secret Billy’s been keeping, perhaps she’ll score some leverage.

Of course, Ashley needs to be careful here. Kyle’s certainly the kind of guy who would double-cross Ash, so it’s wise to be wary. Over with Summer (Hunter King), she’ll come up with a scheme to break the sex barrier with Billy (Jason Thompson). After she updates Kyle, he’ll spill the beans to Phyllis (Gina Tognoni) and set off an explosion of conflict.

Later, Y&R spoilers say Phyllis will crave vengeance. It sounds like Summer had better watch her back! Sparks will fly between Summer and Billy, but will they start the real fire that Summer wants? Time will tell, but Summer probably won’t give up anytime soon.

Elsewhere, Mariah (Camryn Grimes) will be filled with worry. As the days go by without word from Tessa (Cait Fairbnks), Mariah will fear the worst. Fortunately, it appears good news will arrive at some point. Tessa’s definitely alive, so that’s something to put in the positive column.

Other Young and the Restless spoilers say Nick’s (Joshua Morrow) dirty business dealings will irk Billy (Jason Thompson). He’ll buy the leasing company that Jabot’s using and immediately raise the rent. Billy’s irritation will slowly build to full-blown rage. Y&R’s kicking off a serious war here, so Billy and Nick will be fierce foes in the months ahead.

It looks like some great episodes are in the works. We’ll keep you posted as other Y&R details emerge. Stay tuned to the CBS soap and don’t forget to check CDL often for the latest Young and the Restless spoilers, updates and news.