BY Heather Hughes on July 13, 2018 | Comments: one comment
Related : Soap Opera, Spoiler, Television, The Young and the Restless 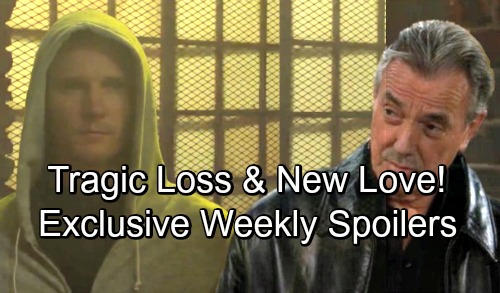 The Young and the Restless (Y&R) spoilers for the week of July 16-20 tease that things will heat up in Genoa City. First, let’s talk about Jack (Peter Bergman). He’ll get some stunning news, so that probably involves the DNA test results.

Jack expects to be confirmed as a Chancellor, but it could still be a shock to see it on paper. Cane (Daniel Goddard) will have to fight for Chancellor Industries the following week, so that makes a match with Phillip (Donnelly Rhodes) likely for Jack. However, there’s no guarantee the results will be accurate. Kyle (Michael Mealor) might be willing to change them to give his dad some peace.

Regardless, Jack will head down a new path soon. The same goes for Nick (Joshua Morrow). He’ll resort to some dark strategies, so that could mean going after J.T. (Thad Luckinbill) as well as Victor (Eric Braeden).

Nick obviously wants to protect Victoria (Amelia Heinle) and anyone else J.T. might harm. He also still wants revenge on his father. Just because Nick got custody again doesn’t mean he’ll back off!

In the meantime, J.T. and Victor’s conflict will continue. Whether this is the real J.T. or not, Victor certainly believes this is his attempted murderer. He wants to end this war, but he’ll soon find out that’s going to be trickier than he thought.

Over with Phyllis (Gina Tognoni), she’ll uncover a startling secret about Billy (Jason Thompson). It seems she’ll find out he’s been gambling behind her back. Phyllis will also bond with Nick on this coming week’s new Y&R episodes, so The Young and the Restless could be laying the groundwork for a romantic reconnection. Both their relationships are going to face turmoil, which could bring them together down the road.

Other Young and the Restless spoilers say tragedy will strike. Hilary (Mishael Morgan) and Lily (Christel Khalil) will have a heated faceoff, but it could lead to disaster. No matter what the circumstances are, Hilary will likely have a miscarriage.

Elsewhere, Mariah (Camryn Grimes) and Tessa (Cait Fairbanks) could begin a new journey. It appears they’ll be ready to turn their friendship into a romance. They’ll be taking a risk, but maybe it’ll be worth it in the end.

As for Ashley (Eileen Davidson), she’ll be surprised when Neil asks to slow down. He won’t want to spoil this by jumping right into a hot and heavy relationship. The Young and the Restless spoilers say Ashley will be cool with that, but she’ll secretly hope Neil changes his mind soon. They could be on the verge of something special.

It sounds like some great episodes are on the way. We’ll give you updates as other Y&R details emerge. Stay tuned to the CBS soap and don’t forget to check CDL often for the latest Young and the Restless spoilers, updates, and news.