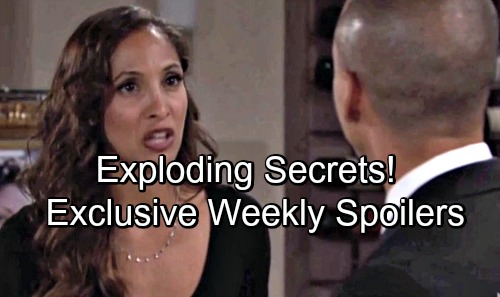 The Young and the Restless (Y&R) spoilers for the week of July 30-August 3 tease that Hilary’s (Mishael Morgan) death will continue to drive the drama. Devon (Bryton James) will bury himself in work instead of dealing with his grief. It’ll ultimately lead to a bit of an intervention from Neil (Kristoff St. John). Devon will set himself up to crash if he doesn’t slow down and face this loss.

Meanwhile, Cane (Daniel Goddard) will do his best to protect Lily (Christel Khalil). He won’t want her to know she caused the accident by running a red light. However, some stunning news could spoil Cane’s plans. If the cops’ investigation points to Lily, there won’t be much he can do to protect her.

The Young and the Restless spoilers say Mariah (Camryn Grimes) will celebrate Hilary’s life on the air. She’ll battle her emotions throughout Hilary’s memorial episode, but a pleasant surprise will be waiting when it’s over. Tessa (Cait Fairbanks) will be there to greet Mariah, so it looks like the plan to find Crystal (Morgan Obenreder) will be nixed.

Having Tessa around should help Mariah thought this difficult time. There’ll still be complications for these two, but they can figure it all out. Back with Devon, he’ll choose to focus on anger instead of sadness. Devon will even accuse Lily of intentionally causing Hilary’s demise. Y&R fans won’t want to miss Hilary’s chaotic funeral!

Other Young and the Restless spoilers say Jack (Peter Bergman) and Billy (Jason Thompson) will face off. Their brother battle will be back on and it should revolve around a familiar topic. Jack still cares about Phyllis (Gina Tognoni), so he won’t like the way Billy’s treating her. They’ll most likely argue about Billy’s gambling addiction as well.

Jack may insist that Billy’s self-destructing like he always does. If this keeps up, Billy’s going to spiral out of control. Elsewhere, Nick (Joshua Morrow) will hide his scandalous trail. Sharon (Sharon Case) may get close to the truth about his hookup with Phyllis. If so, Nick will make some drastic moves to keep that mistake a secret.

Over with Abby (Melissa Ordway) and Arturo (Jason Canela), they’ll discuss both the past and the future. Their relationship will deepen, but major issues may be brewing. The Young and the Restless spoilers hint that Arturo’s family could bring him a world of trouble down the road.

Y&R viewers will want to check out all the twists and turns ahead. We’ll give you updates as other details emerge. Stay tuned to the CBS soap and don’t forget to check CDL often for the latest Young and the Restless spoilers, updates, and news.