BY Marcy Cohen on July 26, 2018 | Comments: one comment
Related : Soap Opera, Spoiler, Television, The Young and the Restless 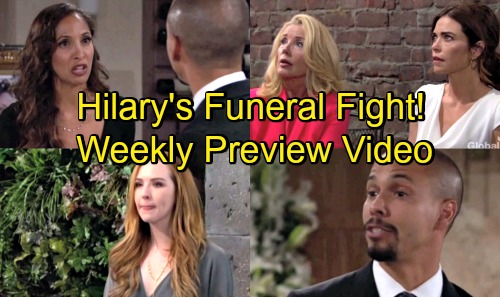 The Young and the Restless (Y&R) spoilers for the week of July 30-August 3 tease that we’ll see the aftermath of Hilary’s (Mishael Morgan) death. She had plenty of enemies around town, but most of them became friends in the end. Hilary was lucky enough to have people who truly cared about her, so there’ll be many mourners in Genoa City.

Mariah (Camryn Grimes) will be crushed by the demise of her cohost, boss and pal. She’ll also be struggling with Tessa’s (Cait Fairbanks) departure. Nevertheless, Mariah will feel confident in her decision to stay in town. She couldn’t bail on her family or the show Hilary left behind.

In an emotional GC Buzz tribute, Mariah will break the news to the audience. She’ll let them know that Hilary didn’t survive her severe injuries. The Young and the Restless spoilers say Mariah will get choked up, but she’ll gather enough courage to carry on.

Devon (Bryton James) will refuse to be on set with everyone else, but he’ll catch a minute of the show on his laptop. However, Devon will promptly shut it off and get back to work. He won’t want to deal with his grief, so Neil (Kristoff St. John) will do his best to change that.

Back with Mariah, she’ll sign off and get up from her seat. When she looks toward The Dive Bar, Tessa will be there with a concerned smile. It looks like she just couldn’t go through with leaving Genoa City. That’s great since Mariah could really use Tessa’s support right now.

Later, The Young and the Restless spoilers say Hilary’s funeral will get underway. It looks like the truth about the red light may come out at this gathering. Lily (Christel Khalil) and Devon will have a fierce faceoff, which should bring tears and accusations. Devon will imply that Lily killed Hilary and her baby on purpose, so that’s sure to cut deep.

At Jabot, Summer (Hunter King) will give Billy (Jason Thompson) a seductive pep talk. She’ll contend that the best way to get over someone is to get under someone new. Is Summer suggesting herself as an option? She may not be that forward, but no one should rule out a hookup for these two. There’s definitely some sexual tension!

Finally, the Y&R cover-up crew will gather for another meeting. It’s been a while since Phyllis (Gina Tognoni), Sharon (Sharon Case), Nikki (Melody Thomas Scott) and Victoria (Amelia Heinle) discussed J.T. (Thad Luckinbill). Now that they know Nick (Joshua Morrow) was impersonating him, they need to reaffirm their pact to hide the truth.

Paul (Doug Davidson) will walk over to the ladies and suggest that this is quite a coincidence. He’ll admit he was thinking about all of them earlier, so that should spark some worries. The last thing they need is another round of questions. We’ll give you updates as other Y&R details emerge. Stick with the CBS soap and don’t forget to check CDL often for the latest Young and the Restless spoilers, updates, and news.