The Young and the Restless Spoilers: Week of June 18 – Billy Surrenders to Summer’s Temptation – Jack and Cane’s Chancellor War 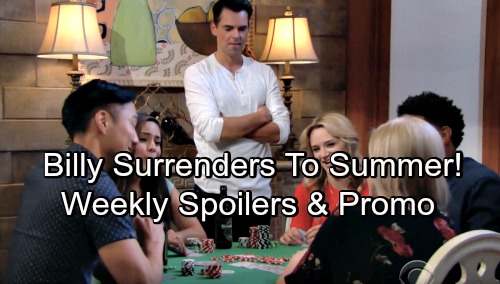 The Young and the Restless (Y&R) spoilers for the week of June 18-22 tease that temptation is brewing. Summer (Hunter King) will prey on Billy’s (Jason Thompson) weakness by throwing poker night at the apartment. Billy has struggled with a gambling addiction in the past, so this obviously isn’t a good idea.

When Summer urges him to join in the fun, Billy will initially turn her down. However, Y&R fans know how persistent Summer can be. She won’t see the harm in a little card game. Summer will insist that it can be their secret, so Billy will eventually surrender. He’ll tell one of the poker players to deal him in. You can bet Summer’s going to use Billy’s actions to her advantage.

Meanwhile, Ashley (Eileen Davidson) will get to know Arturo (Jason Canela). At The Dive Bar, it looks like Arturo and Ash will become fast friends. They’ll hit the dance floor and spark some jealousy for Abby. Nikki (Melody Thomas Scott) will be mostly to blame for planting doubt in Abby’s mind. She’ll contend that Ashley just might be Arturo’s next conquest.

The Young and the Restless preview video shows Abby finding a bra, but we’d say that’s misleading. Arturo seems quite smitten with Abby, so it’s doubtful he’d make a move on her mom right now. Still, Abby and Arturo have some trust issues to work through. They’ll have to find a way to get past their latest struggles.

Over with Jack (Peter Bergman), he’ll use the key he discovered. It’ll open a safe deposit box, which will contain an old photo. Kyle (Michael Mealor) will wonder if it offers any clues about the past. It turns out his dad will get a big hint. The picture will feature Dina (Marla Adams) standing next to Phillip Chancellor, so Jack will have some strong suspicions.

We should note that this photo will have a date on it. Jack will realize the picture was taken nine months before he was born. He’ll become increasingly convinced Phillip is his biological father. If Jack’s indeed a Chancellor, he’s going to want a stake in the company. When Neil (Kristoff St. John) shares the news with Cane (Daniel Goddard), it won’t go over well. Cane will declare that this is war!