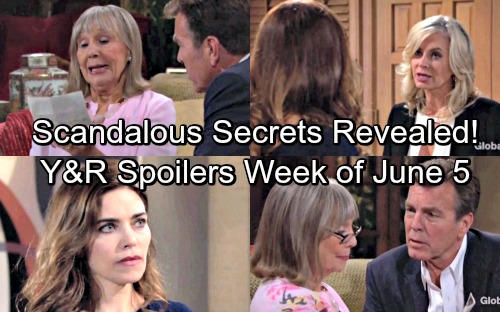 The Young and the Restless (Y&R) spoilers for the week of June 25-29 tease that things are about to heat up in Genoa City. First, let’s talk about Jack (Peter Bergman). Ever since he got DNA proof that he’s not an Abbott, Jack’s been feeling lost. That picture of Phillip Chancellor (Donnelly Rhodes) has given him hope. Jack will continue to pursue this angle and hope it leads to the result he’s looking for.

Dina (Marla Adams) will weigh in on the photo, but who knows if her help can be trusted? It’s not like Dina’s memory is reliable these days. Sometimes she’s aware of what she’s talking about and other times her Alzheimer’s takes over. Regardless of what she tells Jack, he’ll stay on this Chancellor path.

The Young and the Restless spoilers say Cane (Daniel Goddard) will really start to seethe. He warned Jack to back off, but that’s just not going to happen. Jack’s sparking a war and it’s sure to get ugly!

Neil (Kristoff St. John) will have to intervene when this battle gets out of hand. He’ll try to curb the chaos, but it’s only going to get worse if Jack manages to exhume Phillip’s body. Meanwhile, Y&R spoilers state that Nikki (Melody Thomas Scott) and Victor (Eric Braeden) will face a crisis. They’ll have to protect their public reputations when some shockers come to light.

This might tie in with Nick’s (Joshua Morrow) fight for Christian (Jude and Ozzy McGuigen). He’d hate to throw Nikki under the bus, but he may have to do whatever it takes for his boy. Will Nick resort to some public pressure? For example, Nick could splash the details of their previously open marriage all over the news. He could also paint Victor as the ruthless grandfather he is.

Pat Harvey will play a news reporter in the week ahead, so this is certainly a possibility to consider. Of course, there’ll be more J.T. (Thad Luckinbill) drama as well. Thanks to an old credit card and some eyewitnesses, Ashley (Eileen Davidson) will be convinced that J.T.’s back. She’ll warn Victoria (Amelia Heinle) that her abusive ex could show up soon, but what’s really going on?

Since J.T. seemed dead as a doornail when they buried him, this could be some sort of scheme. There’s even a chance Paul’s (Doug Davidson) behind it. It might be a way to get people nervous and convince them to start talking.

Finally, Summer (Hunter King) will pull Billy (Jason Thompson) toward the dark world of gambling again. The Young and the Restless spoilers say there’s going to be trouble! We’ll give you updates as other Y&R info emerges. Stay tuned to the CBS soap and don’t forget to check CDL often for the latest Young and the Restless spoilers, updates, and news.