The Young and the Restless Spoilers: Week of October 22 Exclusive Preview – Buried Secrets and a Shocking Blast from the Past

BY Marcy Cohen on October 19, 2018 | Comments: one comment
Related : Soap Opera, Spoiler, Television, The Young and the Restless 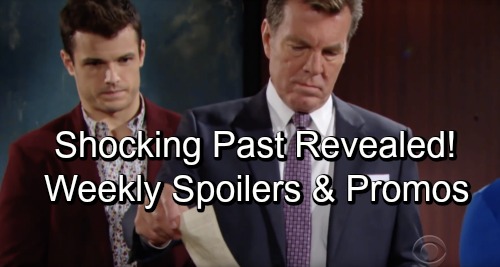 The Young and the Restless (Y&R) spoilers exclusive preview for the week of October 22-26 tease that some bombs are about to drop. First, Rey (Jordi Vilasuso) will react to Nick’s (Joshua Morrow) warning. Nick thinks he’s all big and bad, but Rey won’t be spooked. He’ll make it clear that Nick needs to butt out and back off.

Sharon (Sharon Case) will echo that idea with a warning of her own later this week. She’ll insist that the friends she chooses are none of Nick’s concern. Sharon will just want Nick to get out of her life and focus on his own for a change.

In the meantime, danger will strike for Mariah (Camryn Grimes). Tessa (Cait Fairbanks) should be a nervous wreck if the greedy smugglers are to blame. She needs to come up with their money faster or things could get ugly.

Other Young and the Restless spoilers say Lily (Christel Khalil) will get caught up in a fantasy. She’ll imagine a wonderful night outside those prison walls. Lily will escape from reality, but all her daydreaming could prompt a real getaway plot eventually.

Y&R fans can expect Cane (Daniel Goddard) to get stunning news when he shows up to see Lily. He’ll learn a visit won’t be possible, so big trouble’s brewing. Over at Jabot, Kyle (Michael Mealor) will plan to destroy a document from the safe. It would give Ashley (Eileen Davidson) a serious advantage at Jabot, so Kyle won’t want Jack (Peter Bergman) to take the hit.

Dina (Marla Adams) will stop Kyle from putting this crucial paper in the shredder, but Jack will walk in and get updates. He’ll decide to privately finish the job. However, Traci (Beth Maitland) will foil her brother’s scheme after Dina blabs. She’ll take a trip to the office and tape the document back together.

Plus, we’ll see some fake flashbacks of days gone by. The Young and the Restless spoilers say the show will provide a closer look at the Abbotts’ past. They’ll reveal some shockers and hopefully help this family heal.

Of course, Ashley will make a daring move first. A couple more power trips have to play out before we see any progress. Elsewhere, Billy (Jason Thompson) will need someone to confide in. He’ll turn to Victoria (Amelia Heinle) for support in his time of need.

While those exes bond, Abby (Melissa Ordway) will battle some suspicions. Arturo’s (Jason Canela) bizarre behavior will leave Abby wondering what’s buried in his history. The Young and the Restless viewers will be anxious to find out as well!

It looks like some exciting episodes are ahead. We’ll keep you posted as other Y&R details emerge. Stay tuned to the CBS soap and don’t forget to check CDL often for the latest Young and the Restless spoilers, updates and news.