The Young and the Restless Spoilers: Week of September 17-21 – Fierce Wars, Huge Risks and Exploding Revelations 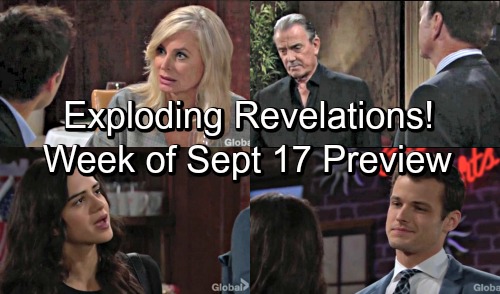 The Young and the Restless (Y&R) spoilers for the week of September 17-21 tease that some big battles are on the way. First, let’s talk about Jack (Peter Bergman) and Victor (Eric Braeden). Thanks to Abby’s (Melissa Ordway) info, Jack will decide he needs to get in touch with Matt Miller (Richard Gleason). He’ll hope Victor’s brother can offer proof regarding his paternity situation.

After Jack makes the call, Victor will do his best to stop the investigation. He’ll urge Jack to call the whole thing off and just move on. Jack will consider dropping his plan, but something Victor says will change his mind. He’ll realize he may be on the right track here.

For better or worse, Jack will want to know the truth about his biological father. He’ll contemplate ordering a paternity test and getting a firm answer. Meanwhile, we’ll see more Abbott drama.

Ashley (Eileen Davidson) will get stuck in a jam as a secret partnership lands in jeopardy. Kyle (Michael Mealor) will also work to bring Billy (Jason Thompson) down, but some snags will cause a bit of trouble.

Victor and Kyle’s past ties will definitely be an issue soon. You can bet Kyle will regret ever getting tangled up with “The Moustache.” As Kyle works to regain control, Traci (Beth Maitland) will come home for a visit. She’ll naturally become part of all the family conflict and exploding revelations.

Other Young and the Restless spoilers say Mariah (Camryn Grimes) will return from her work trip and take a huge risk. Will she do something bold to help Tessa (Cait Fairbanks) get 20 grand? Regardless, Tessa will find it tough to keep her secret. She won’t want Mariah to know about the attack she faced, but hiding it won’t be as easy as she thought.

Sharon (Sharon Case) will also feel guilty for adding more lies to the mix. She feels bad enough for keeping the truth about J.T. (Thad Luckinbill) under wraps, but now she’ll be leaving Nick (Joshua Morrow) and Mariah in the dark on something else. On the bright side, Sharon’s doubts about Tessa have seemingly evaporated.

Later, Sharon will put her problems on hold as she celebrates her college graduation. Y&R fans will see a proud Sharon get lots of praise from her loved ones.

Over with Summer (Hunter King), she’ll make a confession. Will Summer admit that she has lingering feelings for Kyle or will she remain in denial? Whether her admission involves love or not, Kyle will end up moving on with Lola (Sasha Calle)!

Always expect the unexpected on #YR! Next week the mystery of Jack's father grows while relationships blossom in Genoa City. pic.twitter.com/hBi7Q1vldW