BY Heather Hughes on September 1, 2018 | Comments: one comment
Related : Soap Opera, Spoiler, Television, The Young and the Restless 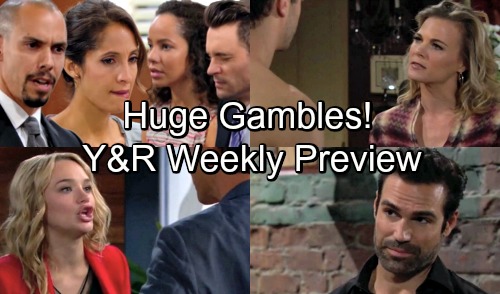 The Young and the Restless (Y&R) spoilers for the week of September 3-7 tease that we’ll see suspicions and surprises. For starters, Rey (Jordi Vilasuso) will continue to make trouble for the cover-up crew. His presence alone is enough to send the cover-up crew over the edge. Sharon (Sharon Case) will do her best to keep an eye on Rey from a distance. She can’t risk getting too close to this shady newbie.

Victoria (Amelia Heinle) will remain freaked out as well, but she’ll have to press on. As for Rey, he’ll face family drama. The tension with Arturo (Jason Canela) will rev up, so Abby (Melissa Ordway) won’t be able to contain her curiosity. She’ll approach Rey and push him to admit the whole story. Abby will just want to know why Rey and Arturo hate each other’s guts.

All will be revealed eventually, but probably not right now. Rey’s too busy to let Abby and Arturo issues slow him down. Over with Lily (Christel Khalil), she’ll be sentenced in court. It looks like Devon (Bryton James) may push for the maximum punishment as promised. Will the judge agree with Devon’s point of view? Regardless, Lily will face one of the most terrifying experiences of her life.

Meanwhile, Sharon (Sharon Case) will ponder Tessa’s (Cait Fairbanks) motives. Since Tessa will be in a hurry to raise $20,000 and get some baddies off her back, she’ll need a way to score cash fast. If Tessa seeks Sharon’s help or Mariah (Camryn Grimes) seeks it for her, that’d be enough to raise this concerned mom’s eyebrow.

Other Y&R spoilers say Phyllis (Gina Tognoni) will back Billy (Jason Thompson) up. As he deals with work drama, Phyllis will want Billy to know that she’s still in his corner. She’ll also confide in Kyle (Michael Mealor), who’s secretly plotting against Billy. By the end of the week, Billy will take a huge gamble. It appears he’ll fall into Kyle’s trap and take Sinead (Lira Kellerman) on in a risky tournament.

The Young and the Restless spoilers say Summer (Hunter King) will keep at it, too. She’ll put pressure on Billy as she works to get him in bed. Summer may not pull off her plan just yet, but she’s inching closer to the result she wants.

Elsewhere, Nick (Joshua Morrow) will make a heartfelt promise. He’ll vow something to Sharon, so this could be about their upcoming wedding. Nick may remind Sharon of his love and assure her that they’re going to stick this time. Too bad their secrets will inevitably blow things up down the road!