The Young and the Restless Spoilers: What To Expect In 2019 – Shocking Returns, Breakups, Marriages, and Surprises

BY Sean O'Brien on December 30, 2018 | Comments: one comment
Related : Soap Opera, Spoiler, Television, The Young and the Restless 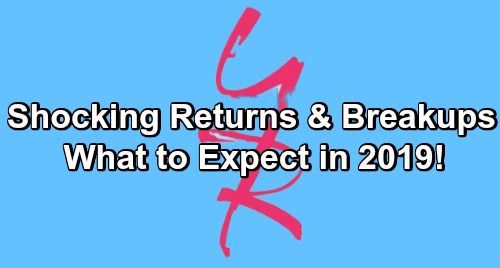 The Young and the Restless spoilers tease that some Y&R’s fan’s hopes will be realized in 2019. Hopes and predictions should always be tempered with realism – although man’s reach should exceed his grasp, else what are soaps for!

If one has seen every single episode of The Young and the Restless for many years, maybe past quarter century, or longer, then there is an unquestionable frame of reference. Soap fans’ devotion to the genre generates instincts for what’s possible.

Unless something unexpected happens, or isn’t known, current Newman family members, including, of course, Victor (Eric Braeden) and Nikki (Melody Thomas Scott), will remain unchanged with the potential exception of an Adam Newman (as last played by Justin Hartley) recast. Why? Well, they’re the lead family on this steamer, along with the Abbott’s.

As far as Jack’s (Peter Bergman) family, it appears as though Dina (Marla Adams) can play into 2019. However, it’s possible that Y&R’s new decision-makers, Tony Morina (executive producer) and Josh Griffith (head writer) could bring this storyline to a conclusion. If that happens, Adams deserves a Daytime Emmy Award win, not just a nomination, at the coming year’s ceremony and maybe also at the next.

Along with Dina’s arc is the real possibility that Eileen Davidson (Ashley) could return. Yes, she just left the show. But the change in Y&R’s off-screen hierarchy could allow at least a recurring reprisal, if not a regular status return later in 2019.

Some couples will split. Others form and some will marry. Let’s consider some of the many duo’s in Genoa City.

Phick feels like a pure rebound pairing. What would come of a future where Phyllis (Gina Tognoni) and Nick (Joshua Morrow) stay together indefinitely, or remarry?

Regardless of what happens with Phick, Villy will (should) re-nuptial. Vickie (Amelia Heinle) and Billy (Jason Thompson) have arrived at points in their fictional lives where a reunion makes sense. Heinle and Thompson also possess the chops to make this redo seem fresh.

Rey (Jordi Vilasuso) and Sharon (Sharon Case) will at least cavort. Mia (Noemi Gonzalez) is very unsure of herself and will push Rey off sooner, rather than later. Shey would also serve to keep Shick apart, as has been Y&R’s bent, for whatever its reasoning, through many leadership teams. Possibly Mia then couples with Nick?

Here’s hoping that Cait Fairbanks (Tessa) isn’t the sole coverup crew tormentor. A guess from this quarter is no. She’s a talented actor who enhances the show.

As for Mariah (Camryn Grimes), having Mia become her GC Buzz co-host would be wise. Miss Copeland needs a sidekick to play off of and Mrs. Rosales has that so-called ‘it’ factor.

Reed (Tristan Lake Leabu) hopefully stays in town, which develops the hybrid Hellstrom-Newman part of the show. More screen time happens for his girlfriend, Mattie (Lexie Stevenson), and her brother Charlie (Noah Alexander Gerry), as this age group of the show expands.