The Young and the Restless Spoilers: Which Two Actors Will Be In Y&R’s Epic Two-Character Episode?

BY Sean O'Brien on September 10, 2018 | Comments: one comment
Related : Soap Opera, Spoiler, Television, The Young and the Restless 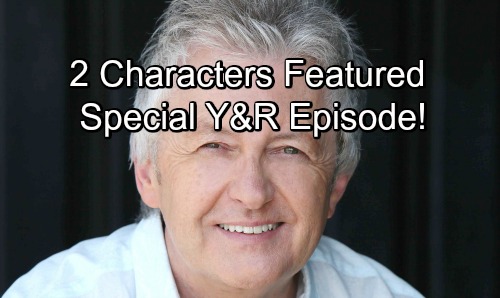 The Young and the Restless spoilers tease that executive producer and head writer Mal Young’s recent projection of a special Y&R episode centers upon only two characters appearing in it. So which Genoa City personalities would make for a dynamic full-episode pairing?

Powerhouse legacy characters could easily fit this bill. A tensed duo would provide intrigue as well. Fresh Genoa City faces could be featured to get them over with the audience. Although, a shocking double return would also be tantalizing. Let’s explore some potential possibilities, among many that can be considered.

Dina (Marla Adams) and John (Jerry Douglas) would be amazingly captivating. Imagine combining the otherworldly elements that have long existed with Douglas’ deceased character with Dina’s Alzheimer’s issues. Y&R fans have never truly known if Jack (Peter Bergman) really was being visited by the spirit of his father, or was merely projecting memories to cope with John’s loss. These two specific characters could talk out the answer to the apparent mystery of Jack’s paternity, allowing viewers to learn the truth before all other linked characters do.

Devon (Bryton James) and Lily (Christel Khalil) are shown in a full episode, which would be set in the Walworth State penitentiary. The characters would likely be shown in a visitor’s room, rather than talking through glass. Apt retrospectives of their entire brother-sister relationship could easily be added to provide depth.

Devon recently said that he won’t be able to forgive his sister for what happened, but also didn’t want his family to endure any more sorrow because of the car accident. An extended, one-on-one Y&R meeting could help to repair what is a fully broken relationship.

Rey (Jordi Vilasuso) and Lola (Sasha Calle) are extensions of Arturo’s (Jason Canela) family. The Rosales’ represent the first new clan in GC in awhile. While Nikki (Melody Thomas Scott), Abby (Melissa Ordway), and the audience have already gotten to know Arturo, Lola has yet to make her debut. It would be interesting to have Rey’s real backstory explained as Lola’s details are unveiled. Both characters could be written as linked to existing character’s, thereby furthering a variety of storylines.

Adam (most recently played by Justin Hartley) and almost anyone. This long-rumored comeback would absolutely set social media ablaze. Whether Sharon (Sharon Case) made contact, Victor (Eric Braeden) located his assumed dead son, Nick (Joshua Morrow) revealed his deep cover executive within Dark Horse, or Chelsea (Melissa Claire Egan) was shown living with her husband, any showing of a recast Adam would be a most incredible, two-person show.

All of the above notwithstanding an episode devoted to Victor and Jack’s long-term relationship and rivalry could make the most sense given the looming paternity shocker this week, September 10-14. The Young and the Restless spoilers tell us that Victor and Jack will be led to fear that they could be brothers!