The Young and the Restless Spoilers: Who Sent The Notes To The Coverup Crew – 3 Suspects Revealed

BY hellodrdavis on October 12, 2018 | Comments: 3 comments
Related : Soap Opera, Spoiler, Television, The Young and the Restless 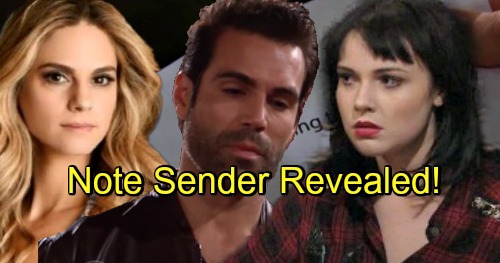 The Young and the Restless spoilers tease that the coverup crew will try frantically to figure out who’s threatening them with the “I know what you did and I’m going to make you pay” notes that each of them received. Nikki (Melody Thomas Scott), Victoria (Amelia Heinle), Phyllis (Gina Tognoni), and Sharon (Sharon Case) are terrified that someone knows their J.T. (Thad Luckinbill) secret, but who could it be?

Whoever sent the letters at the very least knows the four ladies are hiding something, and seems to want to stir them up, perhaps to see what they’ll do as a result. So, who could it be? There seems to be three glaring possibilities.

Rey (Jordi Vilasuso) is an obvious possibility. He’s sure that something went down on girls’ night, but he doesn’t know what. He might have sent the notes to cause some movement in the case. He might figure that the more the ladies meet, talk, and worry about whatever happened that night, the more likely they’ll be to make a mistake. Plus, he may want to watch and see what Sharon specifically does in response to the letter. The fact that she doesn’t mention it to Rey, for example, might tell Rey that she’s hiding something big.

According to Y&R spoilers, the coverup crew will consider that the note sender might be Rey, but Sharon will ultimately reject that idea, as she won’t think that her newfound friend would send her a threatening note like that.

A second possibility is that Tessa (Cait Fairbanks) sent the notes. The ladies will consider Tessa, mostly because she’ll be hanging around and presumably trying to eavesdrop as they’re meeting to discuss the notes at Crimson Lights. This might just be paranoia on the coverup crew’s part, but maybe they are onto something. Tessa needs a bunch of money right now, and the next note (if there is one) could come with a request for hush money. It would certainly give Tessa the cash she needs to pay off the bad guys who helped her smuggle her sister out of the country.

But how would Tessa have found out about the J.T. killing and burial? Well, keep in mind that she doesn’t need to know every detail about what happened; she just needs to know that the coverup crew is keeping something important a secret.

Finally, the note sender could be Mac (Kelly Kruger). Mac will be returning to Genoa City in the near future, as Kelly Kruger is back on set and filming now. The last we saw Mac, she was trying to track down J.T., and chances are she never stopped. Perhaps she found something in her search that led her to believe something happened on girls’ night. Of course, the coverup crew

doesn’t know that Mac’s on her way back, so they likely won’t think about her as a potential suspect.

Whoever sent the threatening notes to the coverup crew members has certainly achieved the goal of sending the ladies into a tizzy. But will the ladies do something to play into the note sender’s hands? Time will tell, but for now the ladies are going to be on edge, to say the least.

Who do you think sent the notes? Stay tuned to the CBS soap and don’t forget to check CDL often for the latest Young and the Restless spoilers, updates, and news.