The Young and the Restless Spoilers: Will Nick and Victor’s Custody Battle Leads to Michael Muhney’s Return as Adam Newman?

BY Sean O'Brien on June 4, 2018 | Comments: one comment
Related : Soap Opera, Spoiler, Television, The Young and the Restless 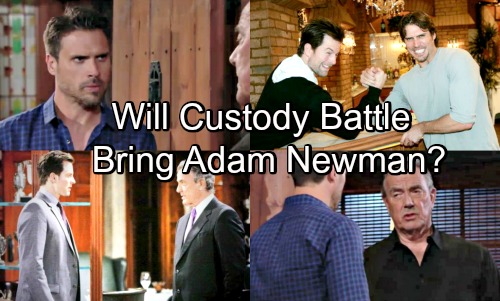 The Young and the Restless spoilers tease that Adam’s (as most recently played by Justin Hartley) return is being established through the again revived Christian (Jude and Ozzy McGuigen) paternity issue. Victor’s (Eric Braeden) threat to Nick (Joshua Morrow) is real and represents an open door, assuming executive producer and head writer Mal Young accedes to fan wishes.

Young’s corporate master isn’t Y&R’s fan base. He takes his orders from those who pay him money, instead of those who represent ratings and buy products accordingly. This isn’t a chicken and egg question. One’s employer calls the shots. The always unknowable customer base does not.

Yes scribe, but what does that have to do with Michael Muhney being rehired to play Adam? And how would that be possible?

The victorious new man, as Nick aptly tagged his dad, Victor Newman, doesn’t hold as much power over his grandson as he might think he does. However, he does retain full control over the money stream at Newman Enterprises and in considering the vast fortune he controls as a result. Okay, but what does that have to do with Adam?

Why would this scribe continue writing about a character who’s been gone since September 2016? Why would he now reference the name of all names, Michael Muhney, as a still-plausible recast for this role? Well, savvy readers know that Muhney is eligible for rehire.

Muhney’s epic termination in December 2013 (yes, that’s approaching five calendar years ago) rightly shocked the soap world. The actor later proved, through a private investigator, that a blogger in Florida, with zero knowledge of Muhney’s firing, was responsible for initiating a rumor about him. That rumor was and continues to be carried by others within the social media world who, like the blogger, know nothing said situation.

Okay, but what does this scribe know? He also knows nothing, directly, but merely continues to look at available facts and soap history.

Muhney had certainly, not probably, maybe, etc., done nothing against any cast member that put him on an ineligible to rehire list. If he had, Y&R never would have interviewed him in 2014, along with Hartley and others, to play Adam (again). Y&R and Muhney confirmed the interview happened, which rendered all theories regarding the aforementioned rumor as conspiratorial.

Wait. Why would Y&R choose to invoke the ire of those who still believe the rumors about Muhney. Wouldn’t those impulsive souls take to social media and concoct a false firestorm in order to try and force him from his job and attack Y&R in the process if he was rehired? Sure and that’s the weighted consideration that’s remained in play.

This feature spoils a speculative future, as all loyal readers know. This scribe wants Y&R to take a leap and bring Muhney back. Not only would he likely create great soap again, but the show would stand up to all who attempt to intimidate others via modern media methods.

So, Adam learns what his father and brother are fighting about when he returns this Summer (Hunter King). CDL is a leading source for everything linked to The Young and the Restless. Check back regularly for Y&R spoilers and news!