BY Annemarie LeBlanc on October 10, 2018 | Comments: one comment
Related : Soap Opera, Spoiler, Television, The Young and the Restless 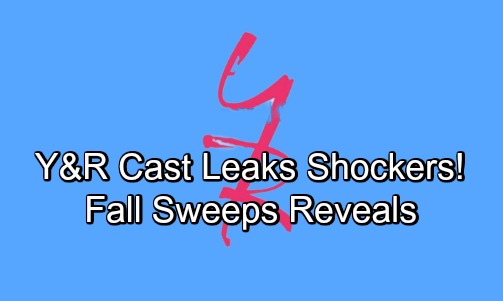 The Young and the Restless (Y&R) spoilers reveal that some stunning moments are ahead in Genoa City. Several cast members took part in a panel discussion on set, so some story shockers were spilled. The Talk’s Sheryl Underwood was on hand to moderate and pump a few popular actors for info. In a recent issue of Soap Opera Digest, the printed discussion offered some fantastic clues.

Melody Thomas Scott (Nikki), Amelia Heinle (Victoria), Camryn Grimes (Mariah) and Joshua Morrow (Nick) were among the panel discussion members. Each one of them had some interesting hints about what’s in store. Let’s start with Scott and her take on the J.T. (Thad Luckinbill) fallout. She admitted that Y&R fans had better hold on to their hats. Things are about to get pretty crazy in that hot plot.

“There is something very big about to happen that could change a lot of people,” Scott said. She reiterated that it’s VERY BIG to get her point across and added that they’re all excited about the “huge shows” to come. It certainly sounds like the truth about J.T. may come out for November sweeps!

Heinle acknowledged that the main drama coming up for her is “the tail end of the whole J.T. thing.” She had a bit more going on back when Victoria was suffering J.T.’s abuse, but she’s fine with taking a backseat now. Something tells us that’ll change once the deadly cover-up’s revealed. We could see charges and a trial for Victoria as well as the other ladies involved.

Next, there’s Mariah’s storyline. Grimes confessed that love will get even trickier for her already burned character. The Young and the Restless spoilers say some tough obstacles will hit for Mariah and Tessa (Cait Fairbanks). Grimes teased, “Is Tessa still hiding stuff? That is a very tumultuous relationship.” She added that Tessa’s mystery will unravel, so it should put deep feelings to the test.

Finally, we’ve got Nick’s battle within. That should rev up even more now that he’s lost Sharon (Sharon Case). What’s to stop Nick from turning completely to the dark side? Morrow noted that we’d see “Nick’s journey down this path of probably trying to stay true to his ideal goal of being very successful but trying to find the balance of good and evil.

The Young and the Restless spoilers say we’ll see the conflict between Nick and Rey (Jordi Vilasuo) intensify. Sharon will definitely be at the center of that. Nick could also deal with some Dark Horse issues, so there’ll be plenty going on despite his breakup.

Y&R viewers won’t want to miss the show’s next bombshells. We’ll give you updates as other news comes in. Stick with the CBS soap and don’t forget to check CDL often for the latest Young and the Restless spoilers, updates and news.