The Young and the Restless Spoilers: Y&R Star Asks Fans for Help – See How You Can Pitch In

BY Heather Hughes on September 17, 2018 | Comments: one comment
Related : Soap Opera, Spoiler, Television, The Young and the Restless 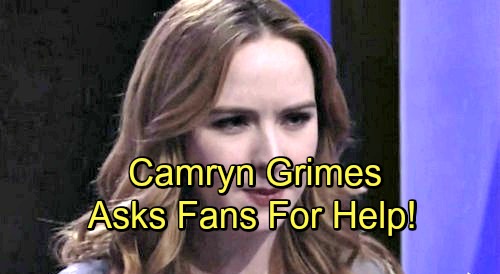 The Young and the Restless (Y&R) spoilers reveal that one CBS soap star needs your help! Y&R fans love Mariah Copeland for many reasons, including the laughs she brings us daily. Mariah’s humorous moments are always something to look forward to, but now her portrayer is asking fans to take a look back.

Camryn Grimes recently sent out a tweet about a project she’s working on. She’s asking for a little assistance to make it happen, so let’s consider her request. Grimes said, “Hey guys! Need your help… Trying to put together a comedy reel & my only comedic stuff is on Y&R. Do you guys have any FAV funny moments from Mariah?? Ep # would be helpful!”

It didn’t take long for viewers to start chiming in with their favorite Mariah scenes. Of course, drunk Mariah was mentioned right off the bat. After having a few too many drinks at Victoria’s (Amelia Heinle) place, Mariah was quick to stand up and make some slightly slurred confessions about her love life. Her speech led to some hilarious girls’ night gang reactions.

Naturally, Mariah’s faceplant at GC Buzz was another classic. The Young and the Restless fans will recall how Hilary (Mishael Morgan) tripped Mariah and sparked a live tumble that went viral. It’s reminder that Hilary wasn’t always the saint Y&R made her out to be near the end! Hilary and Mariah had plenty of comedic wars that could be used for Grimes’ latest reel.

Looking back even further, what about Mariah and Kevin’s (Greg Rikaart) disastrous night of passion? After Kevin warned her not to growl in the bedroom, Mariah insisted it was a purr! It was fun to watch these besties dial it back down to friendship and get past some humorous hurdles.

Grimes is undoubtedly looking for even more of Mariah’s best comedic moments, so which ones come to mind for you? The Young and the Restless spoilers say the comedy AND drama will keep coming in Genoa City, so stay tuned. We’ll give you updates as other Y&R news comes in. Stick with the CBS soap and don’t forget to check CDL often for the latest Young and the Restless spoilers, updates and news.

Trying to put together a comedy reel & my only comedic stuff is on Y&R. Do you guys have any FAV funny moments from Mariah?? Ep # would be helpful!#yr