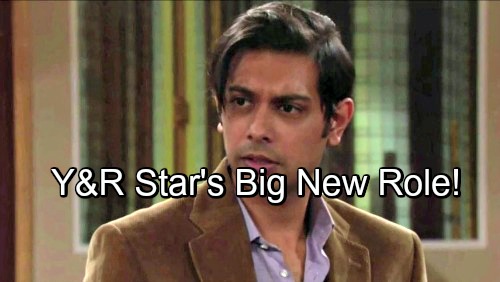 The Young and the Restless (Y&R) spoilers tease that one CBS soap star is heading down a new path. Y&R fans know Abhi Sinha as Ravi, the lovable tech geek. Unfortunately, Ravi hasn’t been seen around Genoa City much lately. Sinha’s GC future remains uncertain, so he’s branching out with some intriguing projects. He recently promoted one of them on Twitter and explained what fans can expect.

Sinha’s scored several film and television roles over the years, but he’s ready to try something new. He’s taking on a leading part in a play, so that’s exciting news. “Been acting for over 10 years now and this is my first play,” Sinha said. “And I’m fortunate enough to be playing one of the leads, and be surrounded by some bad ass actors.”

Sinha also offered a description of what this play brings to the table. He’s hoping everyone interested will come check out West Bollywood. Sinha seems pumped about doing something creative and different than anything he’s ever done. He gushed, “So if you’re into family drama and Bollywood dancing this is the one for you!”

Of course, Sinha should be available if Y&R calls him in for more scenes. This play’s only set to run from Friday, July 27 – Sunday, July 29. We should also mention that Sinha’s been doing some Young and the Restless fan events. That could be a good sign about what’s ahead for him in Genoa City.

Even if Ravi doesn’t get a big storyline, it’d be nice to see him pop up for more tech tasks. Let’s hope someone will rely on his services again soon. Perhaps Ravi’s former flame will request some help! In the coming weeks, Ashley (Eileen Davidson) could find herself in over her head and in desperate need of assistance. Her quest for Jabot domination won’t be without obstacles.

The Young and the Restless spoilers say Ashley may have to play dirty soon. She’ll likely get the upper hand on Billy (Jason Thompson), but Kyle’s (Michael Mealor) sneak attack could be a tougher hurdle. Maybe Ravi could get in on this chaos! We’ll give you updates as other Y&R details emerge. Stick with the CBS soap and don’t forget to check CDL often for the latest Young and the Restless spoilers, updates, and news.

Been acting for over 10 years now and this is my first play. And I’m fortunate enough to be playing one of the leads, and be surrounded by some bad ass actors. So if you’re into family drama and Bollywood dancing this is the one for you! 👳🏽‍♂️🙏🏽 Ticket info on the bottom!:) pic.twitter.com/9dzTji8Tmu